Why My House Is Purple (Updated)

Since I'm returning to blogging, I thought it fitting to repost this re: how we ended up painting our house purple.  Included in this post is the update of when we recently re-painted it purple, this time adding iridescent glitter to the stucco.  That's right, I said, glitter.

The Evolution Of A Purple House

You may wonder how we ended up living in a purple house...

We bought our house in 1998. It was white with light grey trim and had a big Fruitless Mulberry tree in the front yard. 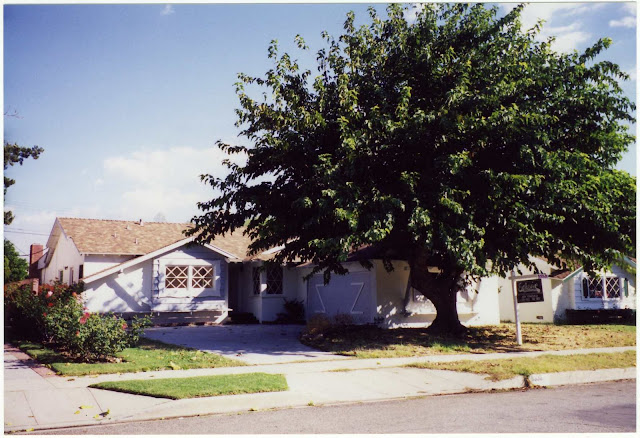 After a couple of years, the tree tried to eat our house. 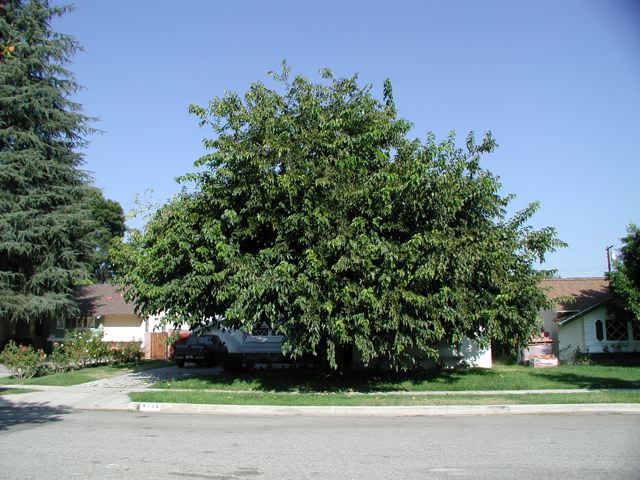 So we removed the tree. And got a new garage door.  Look at the hideous paint job on our house! It's white with darker white trim. It's devoid of color! It's like an anti-Julie house! 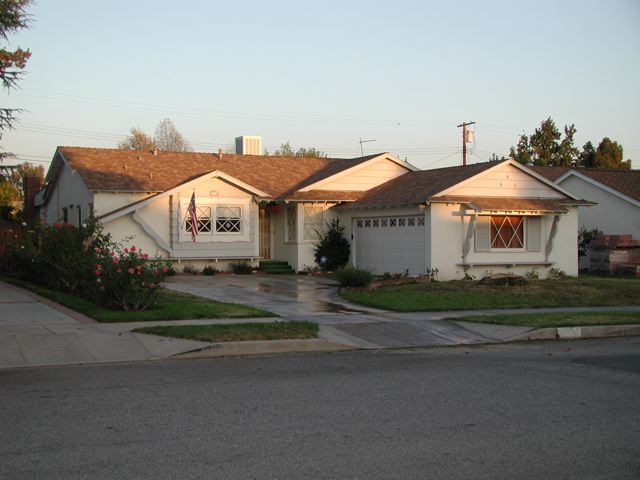 In 2003, we had it painted green, with taupe trim. Green was no longer my favorite color, but was a very acceptable exterior house color for someone who likes "color".  Looking back, I totally should've picked a different accent color than taupe.  Ugh. 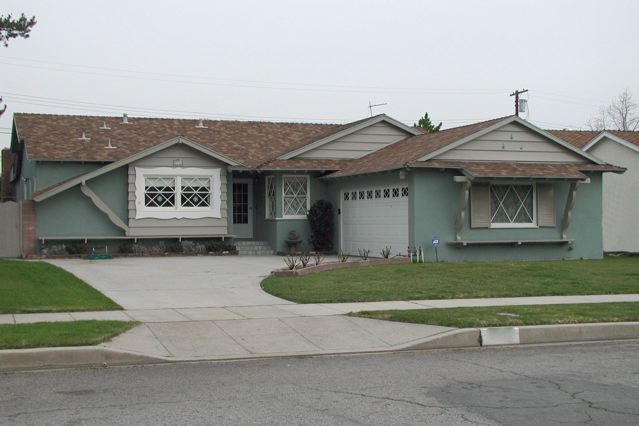 For years I had told Marshall, "You know it's only a matter of time before we paint the house purple." In 2007 the house was due to be re-painted. And to my extreme surprise (because I never actually believed it would happen), Marshall said, "Ok, let's go ahead and paint the house purple. Do it quickly before I change my mind." 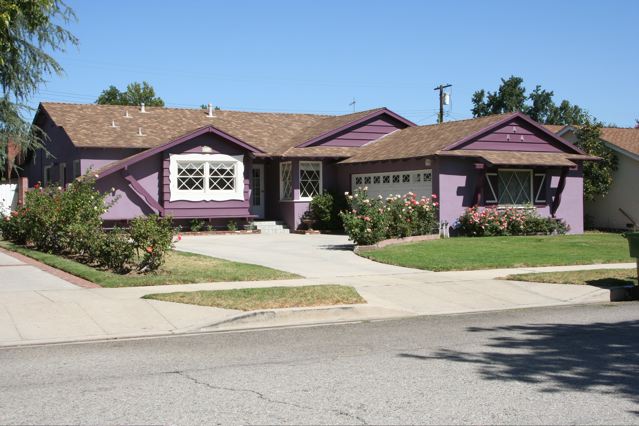 And after about a week of being in shock, Marshall and I decided that we love our purple house. Though I think it took slightly longer for our neighbors to reach that conclusion.


Recently it was time to repaint our purple house.  Of course we were going to keep it purple!

We've had the same painter for over 10 years.  He's the one who painted it purple in the first place.  He's from Korea and is a 5th degree black belt in Tai Kwan Do and a 3rd degree black belt in Hap Ki Do.  When he arrived in America over 30 years ago, he joined the U.S. Olympic Team and became an Olympic Champion.  Why is he now a painter?  Because he was the first born son and in his culture, he was given the option of joining his father's painting company or being disowned by the family.  His younger brother started his own Martial Arts school and our Jason helps out with it, as well as participates as a judge during competitions. His reasons for being a painter make me sad, but due to his personality and commitment to martial arts, he is one seriously perfectionist painter.  And he does tile and moulding too!

Since our kids are Kung Fu trained, and our oldest son Haven is almost a black belt, it was indeed an honor for Haven to spar with Jason, our painter in our home dojo.  Jason is 50 and can still do splits and roundhouse kicks like nobody's business.  Over the years since Haven has been studying Kung Fu, Jason has always taken the time to watch his forms and give him tips.  He's pretty awesome. 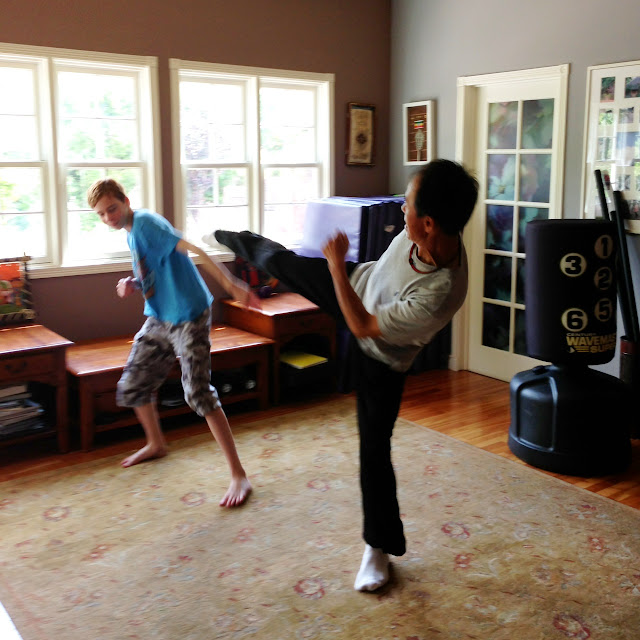 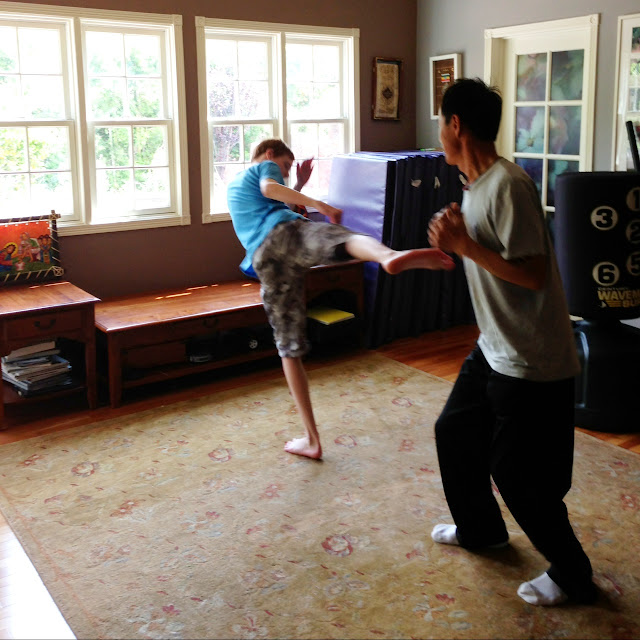 With the house, we decided to do a couple of things different this time.  We chose a purple that was one shade lighter for the stucco than the previous color, for more contrast between the stucco and trim.

Also, for a few years I've been saying to Marshall... "If only we could find a way to add glitter to the stucco."  Marshall would roll his eyes, but when it was time to repaint the house I brought it up again.  He said, "No way!" and then compromised and said I could have a purple glittery front door.  My response, "We can't have a purple glittery front door! Our front door has to be white, like the windows, for contrast against the purple!!!"

I dropped the subject.  A few days later he said to me, "Okay, if Jason can do it, you can add glitter to the stucco."  WOO HOO!!!!

So Jason came over to get the new color swatch for the stucco and to discuss repainting the house.  I told him I wanted to add glitter to the stucco.  He had to pull out his smart phone and find out from his Korean-English app what "glitter" was.  Guess in the 30 years he's been here, he's never had to learn the English word for "glitter".  As soon as he learned what it was, he looked up at me like I was joking.  He said, "I've never done that before."  And I placed my hand on his shoulder and said, "Just think Jason, after this project, you'll be a master at it."  And he said, "I'm not sure I want to be a master at it."  Jason knows I'm a little crazy.  He's been painting for us for over 10 years.

I told Jason I wanted clear, iridescent glitter added to the stucco.  Then Jason did a series of patches, with various techniques, etc. before finding the best way to add it.  The winning technique?  When adding the second coat of paint on the stucco, he would blow the glitter on the wet paint with an airbrush machine.  He used eye protection but apparently one piece of glitter still got in his eye during the project and he had to go to the eye doctor.  But he didn't complain.  And he got into it by the end, even adding glitter to the three triangles above the garage window, and he put double the amount of glitter in the entryway so it would sparkle even more.  He repainted the cement floor of our patio (dark purple) and added two kinds of glitter to it.

And guess what? Our whole family loves it.  Even Marshall!  I've had 3 different neighbors walk over to our house and tell us how much they like the glitter, and they were all men!  Our Harley riding, Hummer driving 6'4 next door neighbor said he thought it was the best house paint job he'd ever seen.  (and went in to say how pretty it was at various times of the day) Since then I've heard that other people on our street also enjoy driving by at various times of day to see it sparkle.   It really does sparkle like diamonds.  I love it.  So the finished result???  Here is our house with the new paint job. 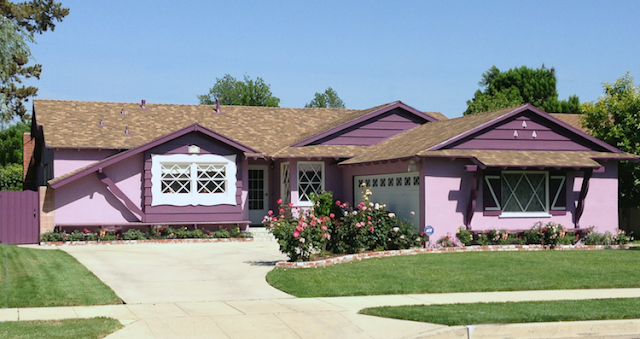 Oh, can't see the glitter?  Well you need video for that.  Here's my reaction to seeing the entry way glitter for the first time, before they were finished with the house.


I don't know why my husband lets me do crazy things like this, but I think there's nothing wrong with adding a little more "fun" into your life.  And for us, that means having a purple sparkly house.  Yeah, I'm a little quirky.  But I always have a smile on my face when I back out of my driveway or pull into my driveway and see my purple, sparkly house.