I swear I haven't forgotten about you guys. Been crazy busy with doctor & Physical Therapy appointments every day which isn't fun or entertaining to write about. Hey, I got another ultrasound... oh right, nevermind. So in the interest of having SOMETHING new on my blog, I'm pulling out the guest post I wrote last year for a blog called Blog Around The World. I was their very last guest blogger before the blog ended. So I think I broke it. Sorry about that.
Anyway, in case you missed it the first time, I am now publishing it on my site. Here you go.
A Fine Line
So I've been thinking about something lately and I'm hoping you all can help me out. Where do you draw the line between having fun and being crazy? Say you really enjoyed reading the Harry Potter series. I'm sure it would be perfectly normal to own all the books and Harry Potter movies. But what if you took it a step further? What if you owned a Harry Potter wand? What if it was a light-up wand? What if you owned two, ok six light-up wands so that every one in the family and one of the cats can play Harry Potter together? What if you have the Beedle the Bard Collector's Edition book? 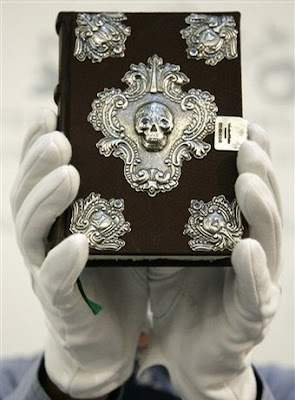 How about a bunch of Harry Potter figures and toys? And the Harry Potter 20Q game, that you keep on top of your computer so it's within reach at a moment's notice? What if you used crystal letter stickers to spell out sayings from Harry Potter like "I Solemnly Swear That I Am Up To No Good" and "Mischief Managed" on the front of your 24" iMac? And Harry Potter ornaments on your Christmas tree? That's normal, right?

What if you become a fan of the Twilight book series? Say you had books 1 and 2 in paperback, but books three and four in hardback. It would be perfectly normal to re-purchase books 1 and 2 in hardback so that you have a matching set, right? And it would be perfectly normal to go see the Twilight movie when it came out, right? Even on opening night at the midnight showing? What about seeing the movie four times in the first two weeks? What about playing the score and/or the movie soundtrack every day? Or owning one, ok eight Twilight shirts? How about if you ask everyone you know through your blog, Facebook and Twitter to help you find Twilight band-aids that were so hard to find (but are now back in stock at Hot Topic online and will hopefully be arriving tomorrow)? How about if you convince your husband that even though you have the books at home, you still NEED to buy the Twilight book for your iPhone, just in case you NEED to re-read it when you are waiting in line. Or driving. And you're still within the boundaries of "normal" if you own Twilight perfume? 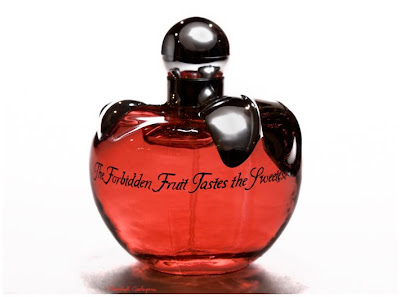 What if you have a favorite color, like purple, for example. And say you like purple so much that you have several shirts in this color. A purple KitchenAid mixer. A purple Dyson vacuum. A purple chair in the living room. You paint the dining room walls purple. And the laundry room walls too. Still ok, right? What if, when you need new clothes, you go on to websites like Banana Republic and Gap and type "purple" in the search bar, selecting your clothes from the choices that come up? What if you bug your husband for years until he finally cracks and lets you paint the entire exterior of the house purple?

What if you have a section of your hair dyed purple? Or get a full size purple Christmas tree, pre-lit with purple lights? What if you hang purple icicle lights on your house at Christmas time? That's perfectly normal, right?

What if you're a fan of the television show, "Buffy the Vampire Slayer". Of course it would be normal to have all seven seasons on DVD. But what if you had a Buffy action figure? What if you had two, ok sixteen action figures? And you have your husband install very beautiful Pottery Barn shelves next to your computer so you can display those action figures? What if you have a Buffy calendar on the wall above your computer? What about a Buffy clock, pencils, lunch box, comics, mugs and shirts? What if you have several prop replicas from the show like the Orb of Thesulah, full-size slayer scythe and some jewelry featured on the show? That's ok, right? But what if you got a life-size cardboard stand up of Buffy? What if you nickname her "CB" (Cardboard Buffy), and take pictures of her in different rooms of the house?

What if you take pictures of CB in front of your purple house, wearing a Harry Potter scarf and a Twilight wool cap? 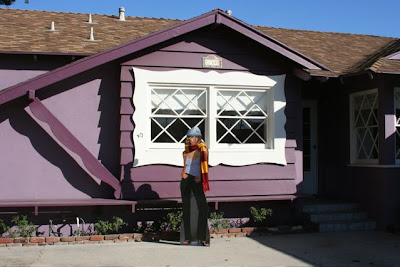 Sigh. That last bit set me over the edge, didn't it? THAT was the fine line between having fun and being crazy. And I think I just crossed it.

Email ThisBlogThis!Share to TwitterShare to FacebookShare to Pinterest
Labels: crazy, me