You know what happened last night, right? The New Moon Trailer Was Released! I went on a hot date with Marshall! (hot meaning "no kids") First we went to the movies (Wolverine). As we were walking out of the theater, I saw this huge 3-D Harry Potter display and whipped out my Pocket Edward, asking Marshall to take a picture. A horrified look came over his face as he said sarcastically, "Wow, I must have won the luckiest guy in the world award. I am soooo incredibly lucky right now." But he took the picture! (bear with me... the lights were dimmed and he took it with my camera phone. Can you spot Pocket Edward? Then he took me to dinner at a fancy shmancy steak place. If you think a high class restaurant would keep me from whipping out Pocket Edward for some pictures, you would be right WRONG. That's right. Who cares that we were in a fancy restaurant... the kind where they re-fold your napkin when you go to the restroom. Who cares that rich snooty people at other tables were looking down their noses at us and whispering to each other while we had Pocket Edward out. I can show very unflattering pictures my cat takes of me... clearly I have no shame. 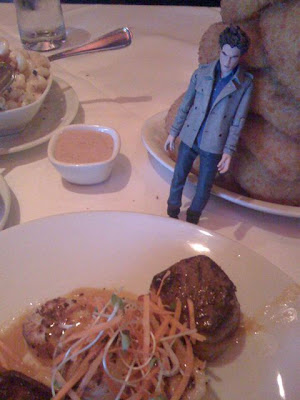 Marshall better watch his bacon-wrapped filets. Looks like Edward's going in for the kill. 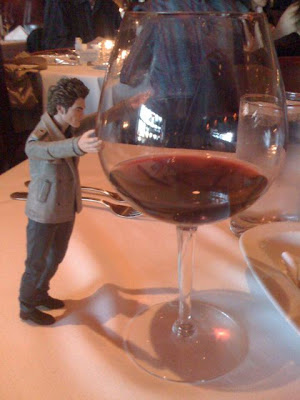 Come on, Edward. Don't you think you've had enough wine? 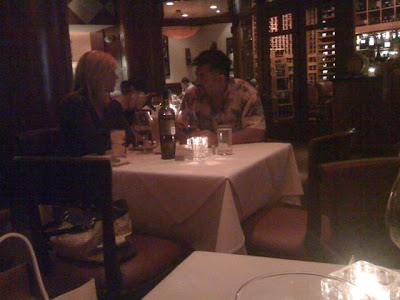 That's the snooty rich people who were looking down their noses and whispering to each other about Pocket Edward. Shhhh..... 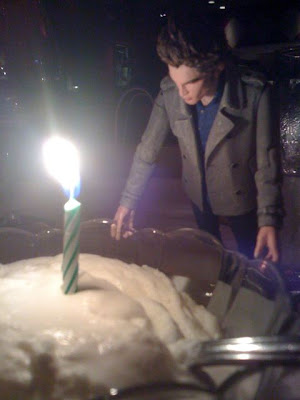 And even though I wasn't home when the New Moon Trailer first went live, it didn't mean that we couldn't celebrate the trailer's release with Pocket Edward.

Yep, I've officially lost my mind. But you already knew that, didn't you? And just in case you missed the New Moon Trailer... here it is...

Email ThisBlogThis!Share to TwitterShare to FacebookShare to Pinterest
Labels: fun things to do, Twilight