The Power Of Suggestion

Friday night I was having a crazy dream. We had last minute guests and I just realized I didn't prepare anything for dinner, but then Marshall whips out the gourmet meal that was almost ready to serve (that I somehow didn't notice him making while I had been standing in the kitchen). The absurdity of the dream was, Marshall hadn't cooked a single dish in his life. The next day I told him my dream over lunch and we both laughed at how funny it was... me dreaming about him cooking.

About an hour after lunch, Marshall was at his computer in another room. He called out to me and asked me if we had a 2 qt. casserole dish. I told him we did and then asked him in a very suspicious tone, "Why?". He said, "No reason". (yeah, right) Then he took Seamus with him to the grocery store. I knew my dream had inspired him. But he refused to tell me what he was going to make. When he got home, he made me stay out of the kitchen while he put all the groceries away. Then I walked in the kitchen and asked him what he would need... measuring cups & spoons, knife, cutting board, skillet, pans, oven mits, etc. I got all the stuff out for him and then he made me leave the kitchen and STAY out of the kitchen.

It was very interesting to listen to the sounds of him preparing the dish and trying to figure out what it was. I had no idea. Shortly after he started, he called out to me and asked what it meant to "temper the egg". *kinda scared now*

He was busy working away in the kitchen and I was secretly hoping his dish was a success. I was sure if it bombed, he would never try to cook again.
At one point I heard what sounded like red wine being poured into two wine glasses. Oh yeah! (and this is the part where you ask me how I knew it was RED wine as opposed to WHITE wine... easy, we only drink red wine.)

Finally the food was ready and it was time to eat. He made... Homemade Macaroni and Cheese! 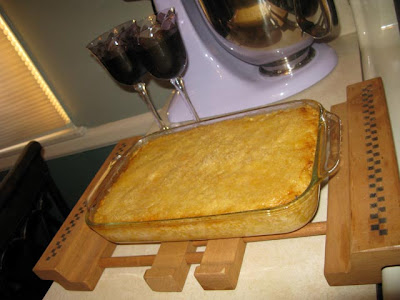 It was awesome! Well, to Marshall and I it was awesome. Admittedly, this was his first time chopping an onion and lets just say there were some big and crunchy pieces of onion in his dish. He and I didn't mind it at all because it was soooo yummy. But the onion chunks did turn off the kids. Haven, our pickiest eater, told Marshall it was delicious and proceeded to eat everything in his bowl without a single complaint. We were shocked because getting him to eat a meal is usually a struggle, both with having a bird-size appetite and being extremely picky.

But today when Marshall was out running errands, Haven had a little talk with me. Apparently there was something he needed to get off his chest...

Me: "But you said it was delicious and you ate it up without a single complaint."

Haven: "Yes but I said that to Daddy because I wanted him to feel proud of his first time cooking."

Hmmm... how come he never does that when I cook? And more importantly, I need to take my dreams more seriously. I'm thinking I should concentrate on winning the lottery next.