This Is The LAST One (I don't promise)

Never let it be said that I don't listen to my readers. Some of you suggested I get a huge, giant bunny, and I listened and obeyed. (i.e. it's YOUR fault)

Meet Hagrid, the Flemish Giant! He's not quite a year old, so he will get bigger. (Yay!) 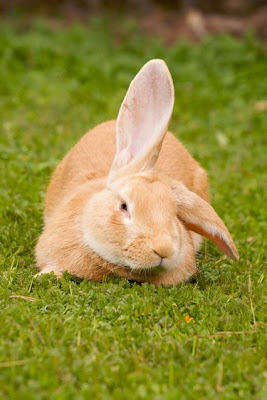 He was discounted because of the floppy ear. See, we're such nice people, getting a defective rabbit and loving him despite his flaws. Actually I probably would've paid extra for that, because floppy ear = AWESOME.

The breeder assures me that Flemish Giants are not big diggers like the smaller bunny breeds and that this bunny will NOT be burrowing under our house to remove our insulation and spread it all over the yard. Marshall is a little nervous. He thinks bigger paws = bigger holes.

Anyway, we picked him up on Sunday. Here he is with our outside kitty. They match! I think it's fate. 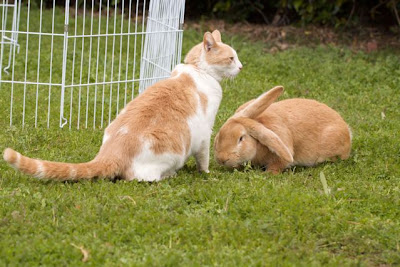 Look! Our kitty loves him already! Say it with me... Ahhhhhh 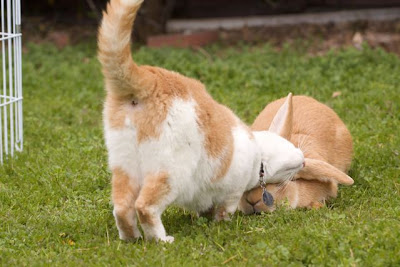 Hard to tell from the pictures, but he's actually bigger than our kitty. And our kitty is very large for a cat. Maybe this will help put it in perspective.

This is Hagrid next to Edward Cullen... 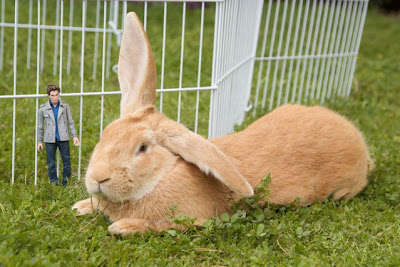 He even lets our kitty smell his butt, which I'm sure means they're going to be great friends! 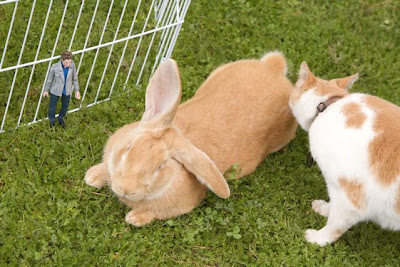 Now this particular bunny will run up to you for you to pet and scratch him. This morning when he saw Haven at the back french doors, he ran across the backyard and right up to the french door so he could get some love. I think I'm already in love!

So what about Emmett? (the kitty Marshall agreed to get on the condition that he becomes an outside only kitty so he can be friends with our outside kitty)

Well, turns out even though Emmett is only half Abyssinian, he definitely inherited the Aby genes. I have him in the guest bathroom that is separated from the laundry room by a door. The other inside kitties are all put away to sleep in the laundry room at night. After two days here, he found a way to open the door between his room and the laundry room, introducing himself to the other cats a little earlier than I had planned. Thankfully there was no cat fights and they all seem to be getting along fairly well. I did walk into the bathroom once to see him flushing the toilet. Now if I can just get him to use it first.

But as far as adjusting... I'd say he's still a total basket case. A nervous wreck. He starts shaking at the mere mention of putting him outside.