Should I Be Worried? 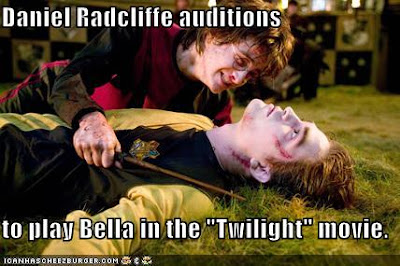 With the current lack of income, we've pretty much cut out a bunch of our luxuries... like Starbucks for breakfast every day that Marshall is home... 2 fast food Dr Peppers for Marshall and I daily, and nightly Starbucks mochas.

Marshall is doing everything he can at this point and is still getting the same answer: Work is slim. So to boost our morale, we decided to watch movies every evening after the kids are in bed. With our Netflix membership on hiatus due to the constant changing of our credit card number, Marshall ran out to the local Hollywood Video to rent a movie. We knew it was extra money, but decided it was worth the $3.80 for an escape.

When Marshall got to Hollywood Video last night, the guy scanned Marshall's card and saw that it had been a long time since we had rented a video from there (due to our Netflix). So the guy decided NOT to charge Marshall for the movie! (I suppose to encourage our business again) You know what that meant right? WE SAVED ENOUGH MONEY FOR TWO DR PEPPERS. Yep, that's how we think here in the purple house.

So Marshall went to the local Jack in the Box for two Dr Peppers. The drive-thru lady only charged Marshall for two smalls but gave him two mediums. VERY COOL. Except, this happens often for Marshall at this Jack in the Box. Up until a week or so ago, Marshall would pick up a Dr Pepper every evening from this Jack in the Box. I've long suspected the drive-thru lady had a crush on Marshall, for all the times he's gotten a discount or a free drink. They've exchanged pleasantries and names. For the sake of anonymity, we'll refer to her as "Inappropriately Friendly Girl". Well last night when he drove up Inappropriately Friendly Girl and Marshall had a little conversation.

Inappropriately Friendly Girl: "Oh. Hey is that Harry Potter there on the dash?"


Oh HEY. Wasn't expecting that!!! That's all I need... for someone who has a crush on my husband to be into witchcraft.

***Today is the last day to enter my Twilight DVD Giveaway. The winner will be announced tomorrow!!!