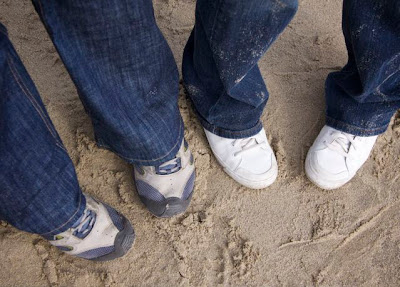 If you didn't check out Susan's post about our Saturday play date, you totally need to do it. Here I thought I was exposing on my blog the fact that she took a Pocket Edward picture and I never dreamed she'd put her Pocket Edward picture FIRST on her post. ON HER BLOG. She's cool like that. And even though Marshall humors me and takes the super cool pictures of Pocket Edward in the beautiful scenery, do you think he posts any of those on his blog? No. (despite my frequent requests) I guess he has a reputation as a "serious photographer" and a "guy" to uphold. Whatever. Susan is not ashamed.

At the end of Susan's post about our get together, she said, "But, if for some reason, she doesn't tell you about the nice but desperate wedding photographer who bought a CF card from Marshall, or how our 9 year-olds were too shy to become buddies til it was time to go home, or ... well, if she doesn't, maybe I will." Oh and she also directed everyone to check out Marshall's stunning B&W photography from that day which I forgot to do. (nice wife I am)

So here I am... I'm back. One of the things I was most excited about with our play date was getting my 9 year old Star-Wars-loving-boy together with Susan's 9 year old Star-Wars-loving-boy. And while my younger two did play with her youngest on the beach, our two 9 year olds didn't say one word to each other after being introduced. In fact, they stayed at opposite sides of the little beach the whole time, each doing their own thing. However, at dinner, they did sit next to each other. And they became best friends, giggling and laughing and having a great time together about 10 minutes before it was time for us to go home. (after our families spent almost 5 hours together)

As for the Wedding Photographer story... Marshall and Susan both had their fancy Canon SLR cameras out and were taking pictures when a very stressed out man approached them on the beach. Apparently he had booked a photo session with an engaged couple and didn't realize until he got here that he had NO MEMORY CARDS for his camera. And after noticing that Marshall and Susan had fancy cameras, he decided to approach them and ask if either of them had a spare he could buy. Marshall had an extra 1GB memory card and offered to sell it to the guy for $20. The very relieved guy paid Marshall $25. (I think Marshall probably could've offered to sell it for $100 and the guy would've paid)

But the cool thing... Marshall has only been out of work a few days and already he's making money! That $25 paid for our dinner. Who says he needs to find more work making movies? He could probably just stake out local beaches with extra memory cards, ready to take advantage of desperate Wedding Photographers.

Email ThisBlogThis!Share to TwitterShare to FacebookShare to Pinterest
Labels: blog, fun things to do