I've Got It Completely Under Control 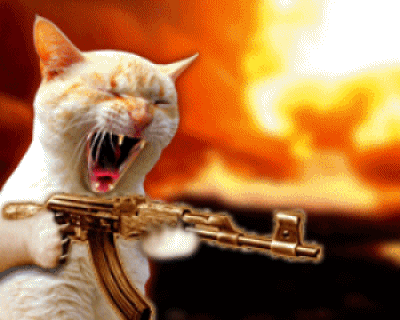 So apparently I haven't been handling this recent terrorizing of the neighborhood (in the form of house and car break-ins) very well. As I've talked to more neighbors and the police, I've learned that our neighborhood has been hit pretty hard in the last 6 months. The police suspect it is one person, a drug addict and his girlfriend that live a block over from us. They've been arrested in the past but haven't been caught lately. The fingerprint lady told me that they are sometimes breaking in while people sleep and stealing whatever is out in the living/family rooms. I thought my sleeplessness would be over once ADT installed glass break sensors. Then the ADT guy tells me there are a million ways for thieves to break windows without setting off sensors. And if they crawl through the window without opening it, it won't set the window sensor off. The best way to protect ourselves is the motion sensor, which just isn't practical unless we want our kids setting it off every time they get up in the middle of the night to go to the bathroom.

Soooo... we're no safer at night than we were before. And that isn't helping my not-sleeping. And apparently going two weeks without a good night's sleep isn't so good. I tried some of the over-the-counter sleep aides but they just left me feeling even more drowsy in the morning. I decided to go see a doctor and see if he could give me something to help the anxiety/sleeping problem.

Oh right, I'm a homeschool mom with no extended family in town... which means I had to drag my three kids with me. I simultaneously threatened (with severe consequences) and bribed them (with cookies) to be quiet and behaved in the doctor's office. When we were led to the exam room, I saw there was only one chair there. So Haven and Seamus squeezed together in the chair and Marlie sat on Haven's lap. All three kids squashed into the one chair, sitting quietly and still. I WISH I had gotten a picture. They were little angels. Must have wanted those cookies badly.

So the doc shows up. Looks at my eyes and eye lids and checks my shoulders for tightness. Then he asks me how my anxiety levels are because he thinks I look awful. (gee thanks) I'm really looking for something that will help me sleep and something to help me calm down when I need it. You know, like a glass of wine in a pill.

He won't give me anything to take "as needed". Nope, he says he wants to put me on something long term for depression/anxiety. I tell him that everyone in my extended family is on something for depression and then he gives me the whole "apple doesn't fall far from the tree" speech. He tells me I can't "will" my genetic makeup to be different than it is. Guess that means I should give up the dream that some day I'll be blond and tan.

I told him I didn't want to be on long-term meds, and I could "tough it out". He asked, if I was diabetic and he told me to take a pill every day for my diabetes, would I tell him, "no thanks, I'll tough it out?".

So he's not going to force me to do anything, but he's not going to give me anything to take "as needed". No glass of wine in pill form when I'm feeling particularly anxious. Dang it! But he did give me something to help me sleep in the short term and he wants to see me again in 10 days.

He says he won't put me on meds until I'm ready to accept that I need them. Hrrumpf.

So now I'm all depressed that the doctor says I'm depressed. I'm not long-term-medicine-girl. I'm strong-has-it-all-under-control-girl. I've got a lot to think about over the next week and half. Mostly, I'm tired and exhausted and don't want to keep feeling this way.

So there you have it... real life and real feelings today. Didn't think you'd see it here, eh? Don't worry. I'll try to not let it happen again.

And yes, the kids did get their delicious, icing-covered cookies when we got home. They earned it.