Friday afternoon the entire family went to our local court to re-adopt Marlie. Why? Well, she became our daughter legally in Ethiopian court in July 2006. The way it usually works with Ethiopian adoption is that you file a power of attorney and someone else attends court in your place. Then once the child is legally yours, you travel to Ethiopia to pick them up. Since we did not see Marlie before we adopted her, she came to the U.S. on a different kind of Visa and was therefore NOT automatically a U.S. Citizen upon arrival. Laws vary by state, but most states then require you to re-adopt the child later in a U.S. Court of Law (after post-placement visits and reports by Social Workers, mountains of paperwork and fees to everyone and their brother). During this re-adoption is where you can legally change your child's name and qualify them to receive an American Citizenship. In Marlie's case, she will also be issued a California Birth Certificate. It will be much easier for her to get certified copies of her birth certificate from the State of California than from Ethiopia if she ever needs to in the future.

Also, there is the matter of changing her name. Though she's been "Marlie" to us in the 2 and 1/2 years we've had her, that was not her legal name. In Ethiopia, a child's last name is their father's first name. When we adopted her, she went from "Faranje Fayye" to "Faranje Marshall our last name". Now, she is officially "Marlie Faranje Fayye our last name".

Last time we went to court was to adopt Seamus. With Seamus, it was totally different. The judge was actually making Seamus our legal son. It was very emotional and Marshall and I were crying. This time, it was just a formality to change our daughter's name, make her a citizen and give her the CA Birth Certificate. But this judge was asking us the same questions the other judge asked us for Seamus' adoption.

"Do you agree to treat Marlie as your daughter, as if she was born to you?"

"Do you agree to provide for her and to love her as your own?"

I was sitting there with a "yeah, yeah, yeah", practically rolling my eyes at the questions because they were silly to me. She was already our legal daughter. This was just a formality. But then I glance over at Marshall and he's all teary and emotional. I'm sure the Judge was wondering what kind of callous, non-feeling mother I was. Thankfully, she approved the re-adoption and everything is official. Again.

While I could show you the usual posing-with-the-judge picture that everyone takes at these events... 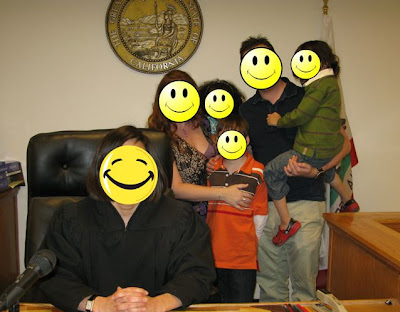 You'd probably rather see the photos we took just before they let us in court. Because when we arrived, the court was still in session for another case and they asked us to wait on the balcony, which looked remarkably like a prison yard.

So like any good parents, we had our kids line up. You know, to practice in case they ever need to participate in a prison line-up. 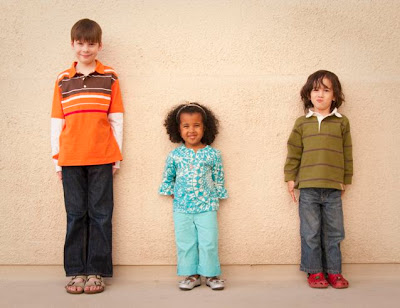 And then we told them to do a "silly" line up, and this is what they gave us... 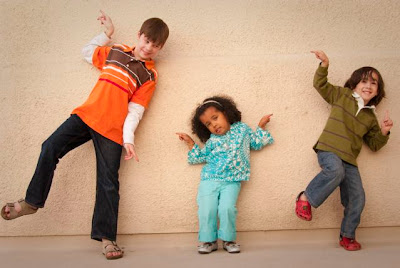 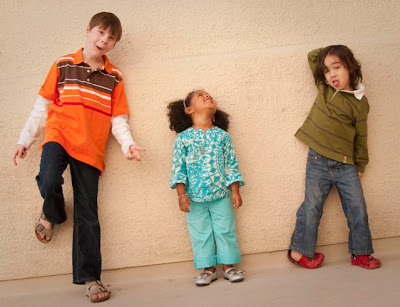 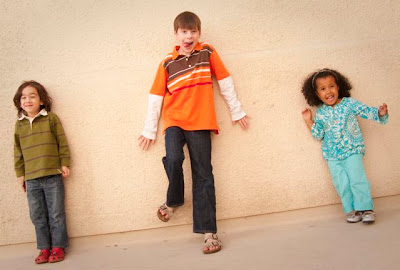 Yeah, those are much better than some silly, sentimental picture of us with the Judge.