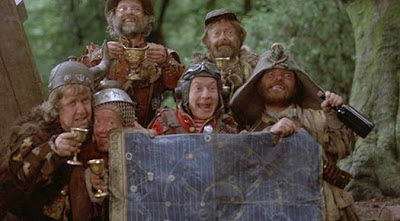 So the ADT guy came out on Friday to beef up our security system. You know all those glass breaking sensors I was going to have installed? Well the ADT guy gave me a long list of ways a burglar could break windows without setting off a glass breaking sensor. He thought our best bet was just to install a couple of motion detectors in our house. It's not really realistic for us to turn on the motion detectors while we're sleeping unless we like being woken up by the house alarm every time a kid gets up to go to the bathroom. But it should make the house more secure when we're not home.

When explaining the motion sensor to us, the ADT guy was saying what will and won't trigger the alarm. According to him, our cats shouldn't set off the alarm due to their size and weight. But big dogs and Midgets (yes, he said Midgets) would trigger the alarm. That's one of those moments where your eyes get big as you try to keep yourself from laughing inappropriately. FYI, Mr. ADT Man, I believe the correct term is "Little People". We watch "Little People, Big World", we're all PC and stuff. But here's the thing... the guy wasn't even joking when he said it. He went on to say, "You see they're small, but they're over the weight limit, so they would trigger the alarm."

Why do I need to know this? Was there a situation where ADT didn't inform the customer that Little People would set off the alarm and ADT was sued as a result? Should I be concerned about Little People triggering my motion sensor? Is there a gang of Little People bandits roaming the streets of L.A. breaking into houses that I don't know about?

If so, I hope those Little People bandits aren't reading this blog, because now they'll know at night when we're sleeping is their only chance to break in undetected.