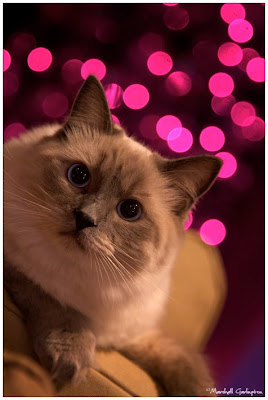 Look at my beautiful kitty Lupin. Yeah, this is before he caught the cold that Giles brought home from the vet when he was having his teeth removed. Giles spread that cold to Ollivander and Lupin. Our hairless kitty (Buffy) apparently has an iron immune system and has not been affected. Of course she's not susceptible to a cold virus. She's Buffy.

Giles and Ollivander got over their colds but Lupin has gotten worse instead of better. Now he's stopped eating and drinking and has weepy eyes and a runny nose with coughing and sneezing. The only time the vet could get us in was at 4pm, during homeschool-time for Haven and nap time for Seamus and Marlie. I rushed to do school earlier than usual, to finish in time to take tired and cranky Seamus and Marlie with us to the vet. (with our sick kitty)

You know, the thing about having 13 pets... you see the vet frequently. I think we're single handedly financing her house and car. And you know how they always do it at the vet... they put you in a room right away, and then they let you sit in that exam room for 45 minutes until the vet is available to see your pet. Yeah, that's a barrel of monkeys with a nap-less 3 and 4 year old. Though I had a little giggle when the kids decided to play I-Spy to pass the time, waiting for the vet to arrive.


Anyway, the vet finally walked in the exam room and declared that Lupin had an upper respiratory infection and was dehydrated. They gave Lupin some IV fluids and a shot of antibiotics.

Now that he's back home, what do I have to do for him? Well, I need to give him a double dose of some nasty-smelling gel (Lysine) twice a day, antibiotics twice a day, force-feed him canned cat food (should be fun), give him several syringes of chicken broth in his mouth (even more fun) and hold him over a humidifier with his face in the steam for 5+ minutes, 3 times a day. (even funner still).

And you know what? I did the humidifier bit the moment we got home. Turns out cats don't really like to be held over a humidifier.

Oh yes. This is gonna be fun.