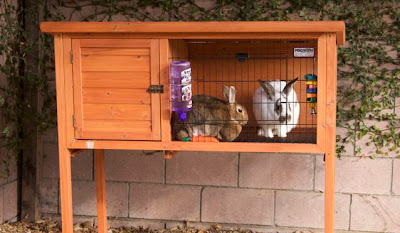 I think the bunnies look very happy in their new home, don't you? I'm sure Spike and Hedwig are thrilled to be in their new, cozy 2-room suite instead of running free in the backyard where they could do things like tunnel under the house and remove insulation from under our master bedroom. Yes, I think they look very, very happy.

It was actually not very hard to catch the bunnies... the, uh, first time. But apparently there is a learning curve when it comes to latching the cage closed correctly. Color me surprised an hour later when I saw a white bunny hopping around the backyard and the cage door hanging down. Of course this time Hedwig was on to us and knew exactly why I was walking toward her. Marshall wasn't home at the time so Haven and I (and the broom that I was holding) did our best to corner her. Twenty-five minutes later Haven and I walked in the house, defeated.

I decided to wait until Marshall was home and we would try again after dinner. I decided to drink two beers with dinner because it probably couldn't hurt my bunny-catching skills and it might just help.

After dinner Marshall said, "Let's do this. Let's just catch her." Oh right... because last time I was just running around chasing her for the sole purpose of getting some exercise. But in less than 10 minutes, we cornered her and I caught her.

And I think I owe it all to the beer.