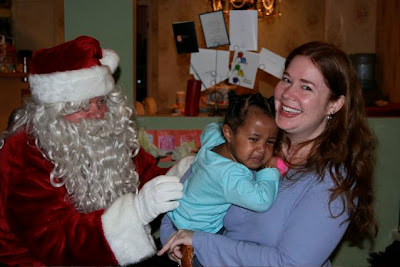 Oh I know it's not Wednesday yet, but I have a very good reason for posting this today instead. You see Wednesday is.... Nah. You'll have to wait and see.

I was not raised with Santa either. My mom comes from Amish and Mennonite roots and we never grew up celebrating the secular aspects of holidays. The most we'd get as decoration at Halloween was some Indian Corn hanging from the front door. So, at Christmas time we did a Christmas tree and decorations, but no Santa, reindeer, or snowmen. Christmas was always a time for celebrating Christ's birth. Oh I heard the Santa story and learned the songs in school, but I never felt any warm fuzzies toward him. Still don't. Though I want to make it clear that I have nothing against anyone who does have warm fuzzies toward Santa. We can totally still be friends. Even if you have a huge animatronic, singing Santa that scares me.

When it came time to raise a family, Marshall and I decided to keep Santa out of our Christmases too and instead focus on Christ. Our kids know the Santa story, and have fun singing the songs, but they know he's not real. Don't worry, I've explained to them that other kids like to believe he's real and they are FORBIDDEN to say otherwise to any of their little friends. So far, so good.

Even though we don't celebrate Santa, he is still occasionally mentioned in our household at Christmastime. One year when Haven was 5, Marshall had been working every day and long hours for almost the whole month of December. Haven had gone weeks without ever seeing his daddy. As a result, he was acting out. Big time. I reached a point one day where I'd had enough. I bent down and looked in Haven's eyes and said, "You are SO lucky there is no such thing as Santa. Because if Santa was real, you'd be getting a stocking full of coal this Christmas instead of presents!"

Probably not one of my better mothering moments.