Only Took Him Four Hours

Haven has been a Star Wars nut for several years now. Though he had been asking for Star Wars Lego sets for a couple of years, we said no. Why? Because the rule in our house was that he couldn't get any kind of toy made up of a bazillion tiny choke hazards while we still had one kid young enough to reach the toys and knock them onto the floor, with another kid young enough to eat them.

Now that our youngest kid knows Legos are not tasty treats, we have finally agreed to allow Star Wars Lego sets in the house. Haven received a few smaller sets throughout the year, but this was the first Christmas and birthday he's had since the Star Wars Lego ban has been lifted.

Between the two events this past week, he received 5 Star Wars Lego sets. Including the set that he wanted most. The Republic Attack Gunship. 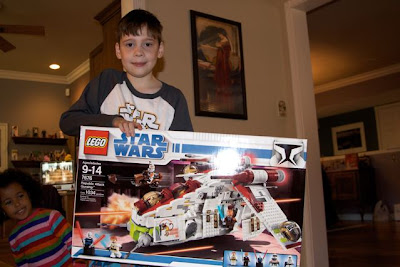 But the deal is... Haven wants to play with them assembled. The putting-together part doesn't really appeal to him. So Marshall has assembled over 3300 Legos since Christmas. During Haven's birthday, Marshall put together that beast of a Lego set while I kicked Haven's butt on the Wii. Oh yeah, that "You wouldn't try to win, Mama... I'm your son and it's my birthday" crap doesn't work on me. Bring it.

Oh right... getting back to the Lego subject. It took Marshall FOUR HOURS to put that baby together. He also set up the camera on his laptop to video tape it in time lapse and squeezed it into the length of a song. Brilliant he is! Check it out.

Marshall is one fantastic Daddy. And thankfully, our son knows it too. During his birthday he said, "I know I'm luckier than a lot of kids." And he is right.