Many of you had questions about this video...

The instruction manual was mentioned in the comments. Actually there were two manuals. 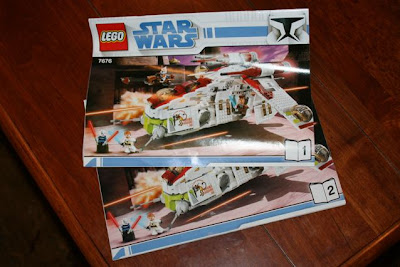 1. How did Marshall make that video?
He used a program called iStopMotion 2 on his laptop (with a webcam). That program made his webcam take a picture every 5 seconds. When it was done, he imported it into iMovie and adjusted the speed to fit the length of the music we picked and then added the music to the video. (and uploaded it to YouTube)

2. Did Marshall have a "potty" break?
He took an hour lunch break. He had Haven pause the recording on the laptop when he stopped, and Haven re-started the recording when Marshall sat back down after lunch. (that's why you never see him getting up) Other than the hour break for lunch, he sat there the entire time with no other breaks. And though it took him four hours to build, there's another video on YouTube where the guy said it took him over 6 hours to build. Well, that's because that other guy is obviously not as talented as Marshall is.

3. Were the kids told to not step in front of the computer, or were those shots edited out?
No shots were edited out and the kids were not told to stay away from the Lego assembly. However, I did put on some movies for the younger kids to keep them occupied in the family room instead of wandering into the living room and tripping... landing face first in the pile of Legos, which they most certainly would've done otherwise. When the younger two kids went down for a nap, Haven and I played the Wii. (while Marshall continued to assemble the Lego set)

4. What Wii game did I so thoroughly kick Haven's butt at?
Boom Blox. It's a game we got the kids for Christmas. And it's my new favorite Wii game. If you have a Wii... YOU. MUST. BUY. THIS. Really. It's so much fun, that we bought a 3rd Wii controller so Haven and Marshall and I could all play together. (you can have up to 4 players with this game)
I was fully prepared to kick some Stormtrooper butt (Battlefront on Xbox 360) but Haven chose to play our new Wii game with me. And for the record, I probably would've won at Battlefront too. I'm a nice Mama like that. Teaching my son life's most important lessons, like your Mama won't let you win just because you're a kid or it's your birthday. Though truth be told, Haven's very good at Battlefront. The only reason I usually win is that I go for the highest kill count while he's running around stealing enemy vehicles. He and I make a great team. A ruthless team perhaps, but a great team.

Now aren't you glad you asked?