Hats Off To You!

We went to a birthday party on Saturday for Angie and Anil's son Noah. This was Noah's first birthday and the theme was "hat party". Sure we all had hats lying around, but if we're going to a hat party, we needed hats worthy of a party. So earlier in the week I went with the kids to our local Party Store to pick out hats. Each of the kids picked their own hats. Then I picked a green hat for myself.

I'm just checking to see if you're paying attention. Of course I didn't pick a green hat. I picked a purple hat made of feathers.

When the party started, the five of us arrived, all wearing our hats.

LWKIOTE was at the party and made sure to point out to me that I was wearing a purple hat. I'm not sure what's tipped her off to the fact that mentally, I'm outside the normal limits. I'm not fooling her one bit.

Here's a picture of myself in that purple feathery hat with the fabulous ladies Angie and Heather. And yes I'm also wearing a purple sweater and purple jacket. 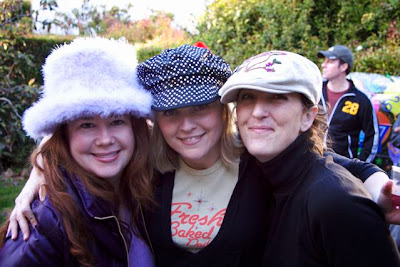 Angie and Heather know me in real life. They can vouch for the fact that I am not some 86 year old freaky man using someone else's profile pictures, pretending to be a 30-something blogging Mama. They cannot however, vouch for my sanity.

Speaking of Heather, I was finally able to meet her new daughter Mimi. What a beautiful girl! 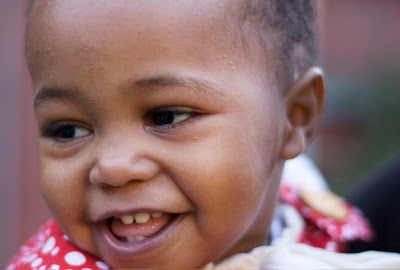 Noah and Marlie are supposed to be betrothed, but now that Mimi is on the scene, Marlie is going to have some serious competition. I believe I even spied Noah showering Mimi with kisses at the party. Thankfully Marlie was looking the other way at the time.

Here's the birthday boy... the guy at the center of the toddler love triangle... 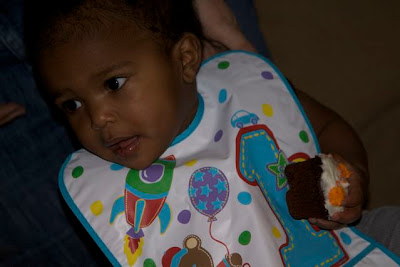 Isn't he a cutie? Marlie is always saying, "Baby Noah is SO beautiful!" And she is right. Though I'd expect in a few years he might prefer the term, "handsome".

So, you wanna see the kids in the hats they each picked out? 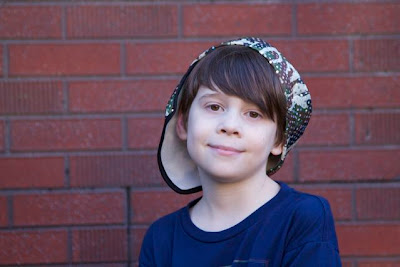 I know Haven's wearing some ridiculous sparkly camouflage hat, but I LOVE this picture. The look on his face shows his sweet and loving personality. 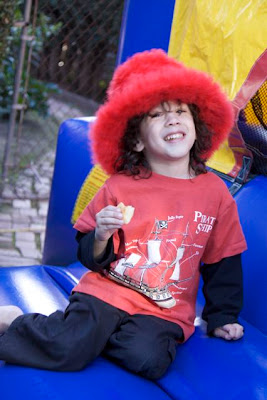 Evidence once again that Seamus is indeed a Rock Star. Not many boys could pull off a red feather hat and make it look as cool as Seamus does. 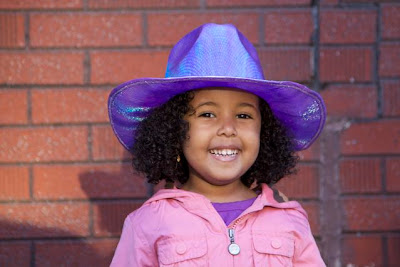 I seriously did not influence Marlie's choice of hat in any way. I did however think the iridescent purple cowgirl hat was a great choice. As soon as she saw the pile of hats at the Party Store, she knew this was the hat for her.

And what about Marshall's hat? Marshall wore his crazy American Flag hat that we got 10 years ago in a shop on Pier 39 (San Francisco) on our 2nd wedding anniversary. It looks like this... 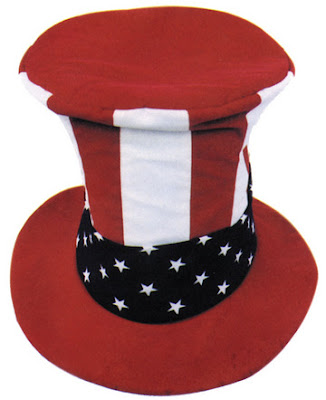 For the record, I did take a couple of pictures of him wearing it at the party, but he thinks he looks like a "dufus" in the pictures so I very graciously did not include them in this post. You see, he's the photographer in the family. I have to be kind and post only pictures of him that he approves of, hoping he'll always do the same for me. Interestingly, he actually did post a picture of me from the party on his blog without checking with me first. But after reading what he wrote, I could hardly be upset. Hat or no hat, I've got a good man.

Email ThisBlogThis!Share to TwitterShare to FacebookShare to Pinterest
Labels: fun things to do, purple