Eat My Cat Food At Your Own Risk 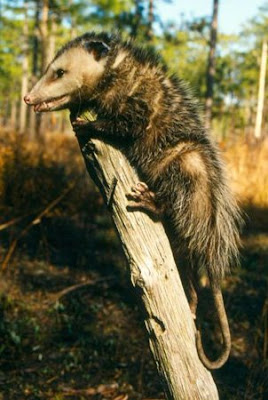 Ah, the opossum. Such a gentle, beautiful creature. With the lovely bald patches and the rat tail, and the way it hisses at you when you hit it in the head with a shovel. Repeatedly.

The other night I was making dinner with my mother, who was visiting. Haven rushed into the kitchen in a panic, saying there was some strange creature on the porch eating our cat food. I knew it was either a raccoon or opossum. Opossum it was. I ran outside to scare it away and noticed that there happened to be a shovel lying there on the patio floor. I was thinking the shovel might be a good deterrent for future visits by this opossum. So I whacked him as hard as I could with it. He didn't run far, so I chased after him and whacked him again. I got him cornered against the cinder block wall in the backyard and whacked him again and again and again. As hard as I could with the shovel. Mostly in the head. He slowly started to climb the wall. I whacked him again and again and again. (and again) He did eventually climb over the other side of the wall and got away from me. I'm not entirely sure that I didn't cause some internal bleeding. Perhaps the neighbors got a nasty little present waiting for them in their backyard the next morning.

Wow... why all the violence? Didn't you hear? My mom was visiting. I couldn't very well whack her, now, could I. Poor 'possum. If he did survive the night, he would be wise to warn his little 'possum buddies to stay away from our cat food. Especially when my mom is visiting.