The Boy Has Decided 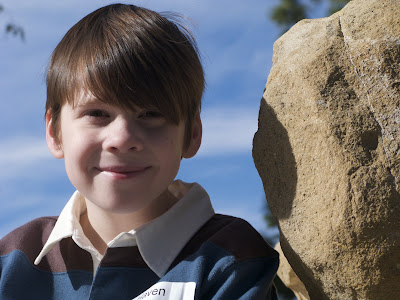 Since we brought Marlie home from Ethiopia in 2006, we've been involved in the local Ethiopian adoption community. We've met and become friends with many other families who have adopted children from Ethiopia. Not long after we brought Marlie home, Haven announced that he wanted to marry her. When he was informed that he could not marry his own sister (this isn't My Big Redneck Wedding), he resolved to marry someone with brown skin who was beautiful like his sister.

About a year ago, the Ethiopian daughter (Dila) of our friends decided she is going to marry Haven when she grows up. At the next social gathering our families both attended, she made a point to inform Marshall and Haven of her decision. Surprisingly, Haven did not run away screaming upon hearing her plans. He simply tucked the information away and decided to think about it. Every now and again I would bring up Dila's plans to Haven, to try to embarrass him. It didn't work. He would simply look at me with a thoughtful look on his face and say, "I haven't decided yet."

Fast forward to a couple of weeks ago, when Haven was helping Marshall put the Christmas lights on the house. Haven was talking about Star Wars. (again)

Haven: "I think I'd like to have a room in my house that's just for all my Star Wars stuff."

Haven: "That is, if it's ok with Dila. Cause I think I'd like to marry Dila. She's just the kind of lady I'm looking for. Cause I want to marry a lady with brown skin and she's very brown skinned. She loves God, doesn't she?"

Haven: "Well I'll have to wait until she's older."

Marshall: "To ask her to marry you?"

Incidentally, Dila recently called Haven on the phone. It was his very first phone call from a girl. He was so embarrassed, he talked very quietly and mostly mumbled.

Dila and her family are coming over to our house for a visit the day after Christmas. It has been a while since we last got together with them. Marshall and I are pretty excited because we really like Dila's parents. I think it's safe to say that Haven is "pretty excited" too.

I wonder when Haven plans to tell Dila the good news.