Better Than A String And A Doorknob 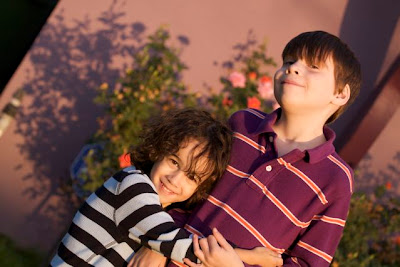 Haven has had this very wiggly baby tooth for quite some time now. The big tooth has already started growing in behind it. Every now and again he has loved to show me how much more wiggly his tooth has become. Usually he tells me to go ahead and wiggle it. Usually I say, "No Thanks". Every once in a while I oblige and wiggle the tooth just to humor him.

Yesterday was one of those days. Haven told me his tooth was even more wiggly and asked me to wiggle it. And I did. Seamus was watching and thought that was the coolest thing, so he immediately chimed in and said, "Hey, I want to wiggle it too". Without hesitation, Haven turned his head to Seamus and opened his mouth. Seamus reached right in and in a split second actually plucked the tooth right out. (apparently he didn't realize he was supposed to wiggle it gently) Haven and Seamus and I stood there in shock with our mouths gaping open. And then we all started to giggle. Now Haven and Seamus think it's the funniest thing and Seamus has even offered to wiggle some of Haven's other teeth that aren't loose. (yet)

At the ripe ol' age of four, Seamus is already responsible for the loss of three of Haven's baby teeth. (his front teeth were knocked out prematurely by Seamus' head)

And to that I say, that's what brothers are for. But Seamus better watch his back mouth when his baby teeth get ready to come out!