First for an update on Hostile Armenian Dude... As I said in my previous post, our local Animal Control office wouldn't let me make a complaint because I personally didn't witness him abusing his dog. But... thanks to my friend Julie and her referral of the ASPCA website, I was able to submit an anonymous complaint with Hostile Armenian Dude's address. Let's hope the ASPCA can do something about it.

Ok... on to the stupid raccoons. Every now and again, stealthy nighttime raccoons will get into our large container of cat food. You know, the one with the screw-on lid that is supposed to be animal-proof. 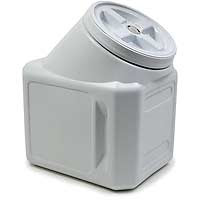 Yeah well, in the couple of years that we've had that food container, the raccoons have successfully broken into it three times. Each time, they've rolled the container off the patio and into the middle of the yard, and screwed off the lid to access the cat food.

Well, the other morning when I got up, I saw that the raccoons had gotten into the cat food again. The container was on its side in the middle of the backyard, lid off and cat food spilling out of it. One of our backyard bunnies (Fang) was lounging in the grass a few feet away. 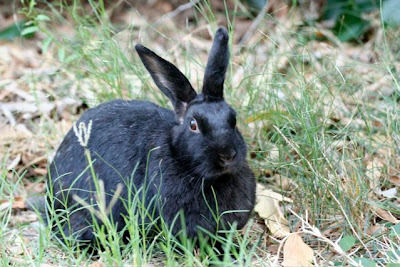 I immediately went out and cleaned the cat food up. Much later in the day, I was walking past the living room window when I noticed that Fang was still in the same spot. But upon closer inspection, I saw that he had moved on to Bunny Heaven. Poor Fang. I went outside to get a closer look. It looked like it had just happened. He was definitely alive (though obviously not well) when I went to clean up the food. The other bunnies and our kitty hadn't noticed yet.

I couldn't for the life of me figure out why he died so suddenly when he was totally fine the day before. There were no obvious wounds or injuries on him. And then I remembered the raccoons and the spilled cat food. Remember my one carnivore bunny that was always eating the cat food?

Well, shortly after we shot that video, I went online to find out what happens when bunnies eat cat food. One of the veterinary sites said that some bunnies will drop dead within 24 hours of consuming cat food. That's when we decided to start feeding our outside kitty up on top of the patio table where the bunnies couldn't reach. (even though our freaky carnivore bunny Spike had been eating cat food daily for months)

And now I'm thinking that Fang must have eaten a bunch of the cat food the raccoons spilled in our backyard. And unlike Spike, Fang must have been one of those bunnies who couldn't handle eating cat food. Stupid raccoons. We hadn't had Fang very long, so I didn't get the chance to really bond with him. Other than to enjoy watching him hoppity hop around the backyard through my living room window.

But now he was dead. And though I really, really love animals (except for dogs)... I don't really like dead animals. And I definitely don't touch dead animals. Well... except for the frozen mice in my freezer. But I don't really think of them as dead so much. I think of them more like tasty treats for my snakes. I buy them online and they come frozen. So I can pretend that they grow that way on trees. But animals that are running around one day and die the next.... I can't touch them. Not even the 15 year old love-of-my-life kitty. When he went on to Kitty Heaven, I stayed at his side and bawled my eyes out. But I didn't touch him. It's just a thing I have about dead animals.

Anyway, so this dead bunny that I never bonded with... what to do with him? Marshall wasn't going to be home from work for several hours. What were my options, other than just leaving him there for Marshall to deal with later?

It's against the law here to bury an animal in your backyard, so we reserve law-breaking-animal-burying only for the pets that we really love. (sorry Fang) I ultimately decided to call "Dead Animal Pickup" who instructed us to leave him in a trash bag on the curb in front of our house for an 8am pick-up the next morning. So, like a kind and considerate wife, I left the bagging job for Marshall to do when he came home from work.

It's probably a good thing I don't always follow my impulses.