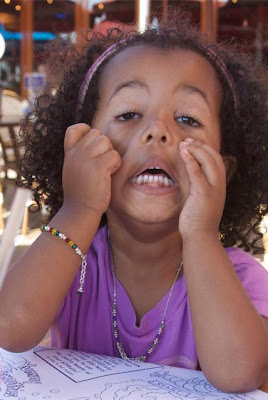 Earlier in the week, Marshall decided we should go out to dinner, to help take my mind off the whole checking-account-cleaned-out-by-a-no-good-thief ordeal. We were already in Westwood (near Beverly Hills) since Marshall was picking up his brand new camera that had just arrived. Westwood... you know, where all the rich people of L.A. live. So we decided to go to a fancy shmancy restaurant like Chili's. My man only treats me to the best! Well, we did have to valet our car at least.

Anyway, so the host guy seats us at one of those tables that shares a long booth with another table less than 2 feet away. I never like sitting in those arrangements because you are so close to the other party's table that you can't talk without your every word being overheard. But when we sat down, the other table was vacant, so we figured it would be fine.

About 5 minutes after we sat down, 7 mentally disabled adults were seated in the table next to ours. They were packed in so tight, that the guy on the end's chair was touching Marlie's high chair. And Marshall and I give each other this look, like we cannot believe this is happening. And maybe it's the stress of the week, or the fact that I'm a horrible person, but I start to giggle. And I can't stop. And I'm having to cover my face in my hands and turn my head away to keep from being painfully obvious that I'm laughing at those people's misfortune. And every time I seem to maintain my composure, Marshall makes a face at me and I lose it again. And then Marshall said to me, "You are SO going to Hell."

And I know it's wrong to laugh. I. KNOW. But for some reason I was having the hardest time keeping a straight face. And that was even before they started the conversation about the "drunkest they've ever been". And inspired by their conversation, I decided I needed some beer. Yes. Maybe beer would help me control myself better. (hey, it's been a tough week... I'm not saying my logic was working so well)

Just when I thought I was controlling myself, the one guy with the clubbed hand started flipping through the menu with his mouth. I. KNOW. I'm a terrible person. His name was Caleb. I know this because his higher functioning friends started yelling his name out, reprimanding him when he started grabbing stuff off of OUR TABLE. Oh yes he did. That was before he started lifting his shirt. Then he and his friends were talking about what was appropriate behavior in public and what wasn't.

AND MARSHALL WAS NOT HELPING ME AT ALL. Oh no. He was egging me on. Loving that he had self-control and I did not. Caleb was having trouble with self-control too, so his higher functioning friends forced him to switch seats, so he'd stop messing with us. Shortly after that, the entire group started singing, "Wouldn't It Be Nice" by the Beach Boys, but they were making up their own lyrics to make it even funner. And then one of them threw his menu across the aisle at an empty table.

By then, I took out my iPhone and started texting Lula, so I could tell her the blow by blow account of how our dinner was going. She thought I was making it up. You can't make stuff like this up.

What about the kids, you ask? Well, Marlie stared at them the whole time. We tried to get her to stop staring, but how can you really blame her, when they were much more entertaining than we were? Seamus was oblivious. Haven turned to me and whispered, "Mama, I think there is something wrong with their brains." Apparently I raised him right, but someone dropped the ball when it came to raising me.

And right after that, a girl at another table, across the aisle from us, started throwing up into her platter of food. Oh yes... Marshall really knows how to show a girl a good time.