Ok, so you all know I have an insane amount of pets at the house. Recently, we got three bunnies from the animal shelter, bringing our total pet count to thirteen. Knowing how insane I am, some of you predicted the number of pets would rise to fourteen or even fifteen by the end of the year. (you know who you are) Let me just say, we have been enjoying the backyard bunnies immensely. The yard is bunny proofed, and we have a happy little colony of four bunnies in the backyard.

So my birthday is this coming Tuesday, and my brother and sister decided to go in on a gift for me. And they offered to get me a bunny. I had to check with Marshall first, who very enthusiastically agreed. (I think he was just relieved they weren't giving me another snake) And really, when your backyard is bunny-proofed... what's another bunny?

So my sister sent me the money and we went today to the animal shelter to pick my birthday bunny out. I had hoped to find a bunny that was already neutered, so we didn't have to wait a few days for it to have surgery before bringing it home. I did happen to fall in love with a bunny, and the sign on his cage said he was neutered. I know a thing or two about bunnies (used to breed them in high school) and noticed that this was no ordinary bunny... it's a Mini Rex, with velvety fur and gorgeous blue eyes. So, we decided to take him home, and we named him Draco Malfoy. 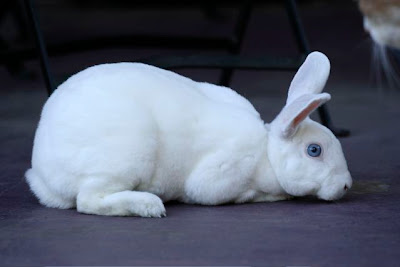 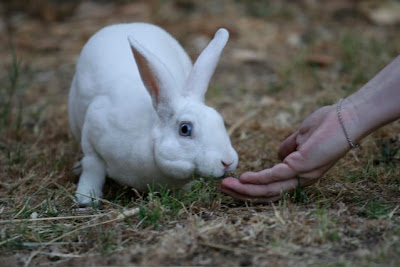 Isn't he cute??? Eating out of my hand and everything.... Yeah, we're taking him back to the shelter tomorrow to exchange him for a new one. Why you ask? Well... lets just say he and our alpha male (Spike) don't play too well together. 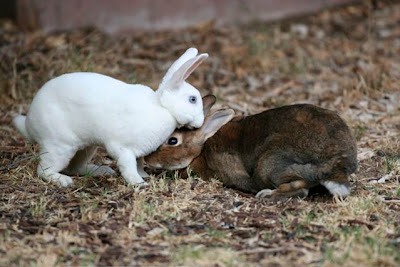 Here's their first contact. Draco (named after a bad wizard) and Spike (named after a vampire) are sniffing each other. You may notice what area of Draco that Spike is trying to sniff out... Hmmm... is that testosterone I smell? Cause right after this picture was taken, Spike decides to go in for the kill... and Draco decided he wanted to play that game too. Spike attacked Draco, and Draco attacked Spike and there was a whole lot of hippity hoppity going on. Marshall put down the camera and was yelling things like, "Hey now! None of that, you guys!" but Draco and Spike ignored him. The fur was flying (literally, because they were yanking each other's fur out), bunnies were flying at each other while I tried to split up the fight. It was NOT pretty. It was during one of those flying-through-the-air moments when I noticed two bits of anatomy hanging down from Draco's backside. Two bits of anatomy that SHOULD NOT BE THERE. And I'm thinking that's probably the reason for the hop-down/drag-out fight.

So... as much as I love my new fuzzy wuzzy bunny Draco Malfoy... Spike is the boss. We'll take Draco back tomorrow and exchange him for a FEMALE. That way if the medical personnel at the animal shelter fall asleep during the medical exam, like they obviously did when they declared Draco "neutered", we won't run the risk of a fuzzy wuzzy fight to the death. Oh, in case you're wondering, I do have a spare bunny cage, which is where Draco Malfoy is currently, and will spend the remainder of his time in, until we get a chance to return him tomorrow. Maybe I shouldn't have named him after Harry Potter's enemy.

Oh, we did finally get a picture of the elusive Crookshanks... if you're curious. (see below) She, along with Hedwig, has joined Spike's harem and is no longer in hiding. Fang (a male) has submitted to Spike's authority and mostly hangs out by himself. I don't really blame the girls... I'd choose Spike too. Oh wait... are we still talking about bunnies? 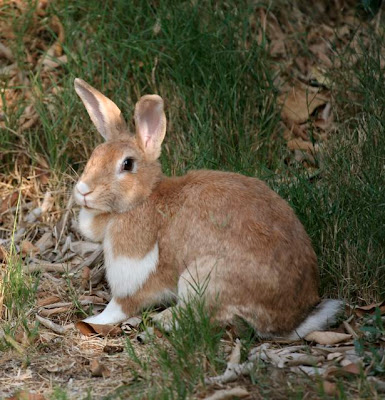