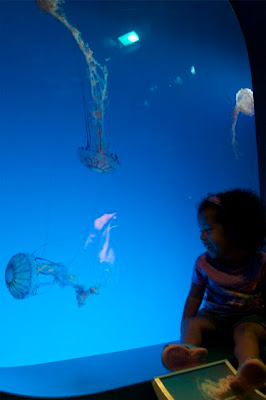 Earlier in the week we went to the Aquarium of the Pacific. We had a great time looking at fish and various other underwater creatures. Marlie and I went into the "Lorikeet Forest". The boys were too scared of the birds (don't ask me why) but my girl and I bought some nectar and let the birds land on my arm to drink it. Marlie wanted the birds to land on her arm too, so I handed her the little cup of nectar, which she promptly turned over and poured out onto the ground. So, we moved on... 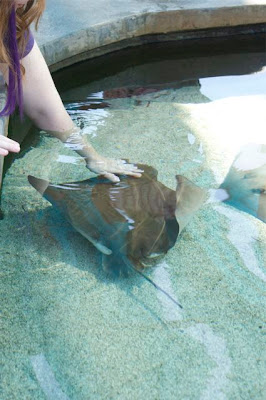 This is me petting the stingrays. That's my favorite thing to do whenever I go to the Aquarium or Sea World. Not quite as fun as feeding and swimming with them at Stingray City in the Cayman Islands, but it'll do. No one else cared about the stingrays, so Marshall watched the kids play at the nearby playground while I hung out with my arm in the stingray tank for 20 minutes. In that picture, you can see my little purple hair extension I've been wearing. Marlie and Seamus love it. Haven hates it. It's kind of a pain to get the clip in, so I'm actually thinking of DYING MY HAIR PURPLE. Well, just a strip of it. Like one purple highlight. What do you guys think? Should I do it? Say... Tuesday at 2pm?

Ok... here are some more fun pics from our trip. 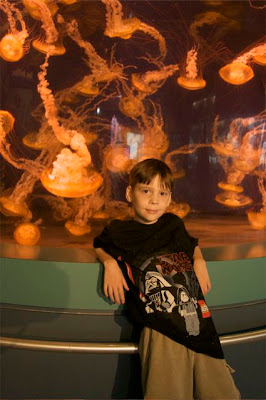 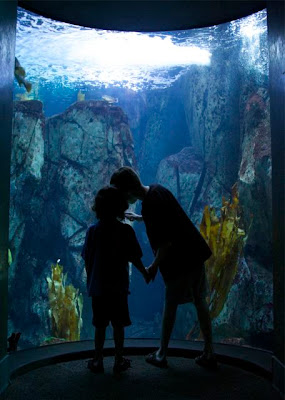 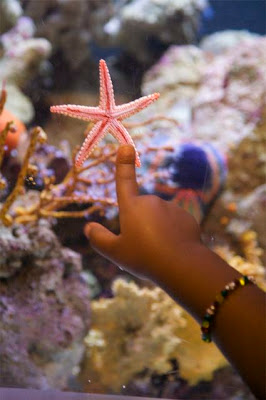 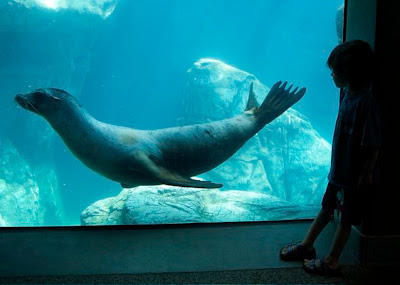 I hope Marshall wasn't planning on posting these on his blog. Hee hee. Oh well... I beat him to it. It's not like he took the pictures or anything. Well, ok he did take the pictures. But he put a copy of all the pictures on my computer. So I'm posting my favorites.

After the Aquarium, we went across the street to Bubba Gump Shrimp Company for lunch. 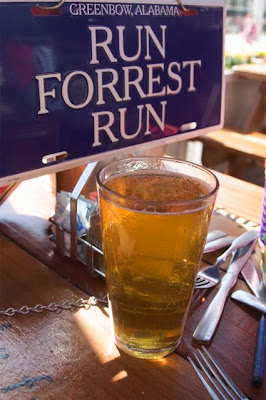 Here's Marshall's beer. Oh yeah, he's a beer drinker now. When I married him, he didn't drink any alcohol. Well, partly because he wasn't 21 yet. But also because he didn't want to. He didn't even drink carbonated drinks. Now, after 12 years of wedded bliss with yours truly, he now drinks red wine, beer and even Dr. Pepper. I'm such a bad influence. But it's ok, you see. We're Presbyterians. We're allowed to drink. And even dance if we want to. Though Presbyterians aren't really known for their dancing. 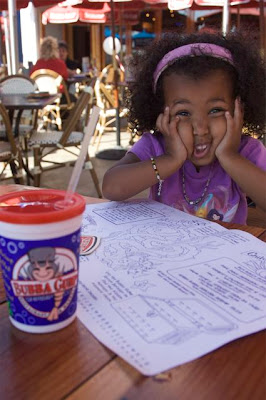 And here's Marlie, giving those great big cheeks of hers a big squeeze. It was a fantastic time. Then we came home and crammed in homeschool until dinnertime. Sigh. It was worth it.

** On a completely different note: Marshall is at work this very day, watching a screening of the movie Twilight. Are you jealous? CAUSE I AM. And he swears he's not going to tell me anything about it. That's just not nice at all. I told him I was going to get a babysitter, so I could hang out in the editing room with him and watch it too. But he said something silly like it might affect his career, not to mention all the endless teasing he'd get from co-workers. Hey. Who's more important here? He starts the final mixing on Oct. 6. Once he starts the final mix, he says he might pause the movie on a still of Bella and Edward, and take a picture of himself standing in front of it, just to tease me. If he does, I'll be sure to post it.

Email ThisBlogThis!Share to TwitterShare to FacebookShare to Pinterest
Labels: extended family, fun things to do