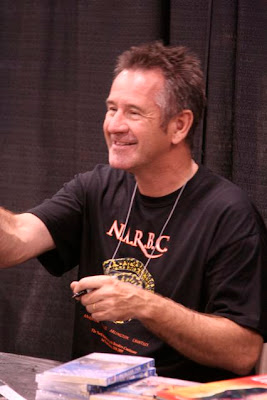 We went to the North American Reptile Show in Anaheim today, which is said to be the "World's Largest Reptile Show". I accept that some of you freak out when you scroll through one of my posts and see a snake picture. So... I figured you'd much rather look at a picture of the Discovery Channel TV host Nigel Marven. There you go. My gift to you. Nigel was a super nice guy and would pose for pictures and sign autographs for anyone who asked. I didn't ask. Instead I just made Marshall take his picture paparazzi-style when he wasn't looking. Of course right after Marshall did his super-stealthy photo-taking, Nigel looked up at me, smiled and said hello. Marshall was looking down at his camera to see if his shot came out and of course missed the exchange and better photo opportunity. Not quite as exciting as Jeff Corwin would have been, but better than nothing, I guess. I'm such a Discovery Channel dork. Yes I cried when Steve Irwin died. Don't make me talk about it, or I might start crying again.
Anywho... like I promised... no snake pictures.

The reptile show was awesome! Non-venomous snakes of every variety, color and pattern. Turtles, tortoises (no they're not the same thing), cute little poison dart frogs (still tempted to get those one day), all types of lizards, spiders (ewwww), etc. Fortunately I did not spot the hissing cockroaches, which I assume were there. There was one point where Haven very urgently insisted that I not look to my right and I obeyed. I didn't ask, but I can only assume there were roaches there. Haven has learned by now that it's best if I not know if there are any roaches in the vicinity. No one wants to see me freak out... there's the screaming and the foaming at the mouth... ok, maybe no foaming at the mouth, but let's just say my reaction is not pleasant and leave it at that.

We did not, however, go home empty handed. Oh no. We got to pick up our newest pet snake (which if you're counting, makes snake #3 and pet #13) from my favorite homeschooling snake breeder, who had a table at the show. Severus Snake (A.K.A. "Professor Snake") is now officially ours.

One thing that I thought was absolutely hilarious (in my sick, sick sense of humor) is that they actually had "pinky" key chains. You know... the baby mice that you I feed to the snakes? Well they had little plastic replicas that were made into key chains. My husband can not tolerate the idea of feeding mice to snakes, so that's something I always have to do when he's not home. He even refused to take a picture of the pinky key chains the first three times I asked him. He couldn't stand to even look at them. Then I promised him that I'd never make him look at the picture, and I'd download it onto my computer directly from the camera and erase all evidence of it... and then he agreed to take the picture. So, uh, you wanna see the picture? See, I'm being nice and giving you the option. Click Here if you wanna see the cute baby mice. Hey, they're all sleeping. Ok, I'll stop.

So after we left the reptile show, the plan was to drop Professor Snake off in his new habitat at home and then go out to eat for lunch. But we ran into some serious traffic. Yes... I know, traffic on the L.A. freeways... what a surprise. And, well, it was already past 2pm and everyone was hungry. Leaving Professor Snake in the hot car was not an option. So... I slipped Professor Snake into my large Coach purse (still in his deli cup with the lid on) and we went to lunch. I put my purse next to me in the booth and we had a very nice lunch. Haven and I peeked in on him periodically to make sure he was nice and comfy in there.

Kind of makes you wonder what other people are hiding in their purses in restaurants.

Email ThisBlogThis!Share to TwitterShare to FacebookShare to Pinterest
Labels: fun things to do, pets