I Spent Money On This

So Haven and I just finished our first week of homeschool. Yes, I realize most kids have had a few weeks of school behind them by now, but neither Haven nor I were ready to give up our summers. So I waited until now to start the school year. Because I can. It's a little scary about how much power I have, isn't it? Don't worry, I'll try to use my power for good, not evil.

Haven is in 3rd grade this year and we're doing all the usual subjects, plus Latin. We did some Latin last year, and though I completed a couple of years of Latin in school myself, I must admit I had forgotten many of the pronunciations. I wasn't really excited at the thought of re-learning the pronunciations, just so I could teach them to Haven. Cause really... WHY do we need to know how to pronounce Latin? It's a dead language, people. I don't want to have to study how to speak it. So this year, I decided to switch to a new Latin curriculum, that has the option of purchasing the lessons on DVD, so I don't have to be the one to teach them. Brilliant. (I thought to myself)

I figured I'd save the Latin lessons for the second week of school, so I only now started viewing the lessons to help prepare for next week. Well, honestly, I only viewed the first lesson. I'm not sure I can bring myself to view any more than that. First off, there are the "students" (which you know are probably just the teacher's kids) standing in front of their fireplace and chanting/singing Latin words. The video and sound quality are, um, interesting. No really, I like the crackle/pop sound when I'm listening to a DVD. It makes me crave some Rice Crispies. 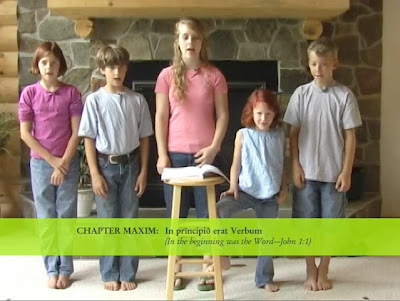 Then it moves on to the dad/teacher, who spends 10 minutes explaining why he's so glad we chose to learn Latin, and how Latin is one of our "Grandmother-tongues" or some boring nonsense like that. By the time it moves on to the lesson, it shows the teacher standing in front of a white board, writing out the words and conjugations. His monotone voice makes Ben Stein sound dynamic. 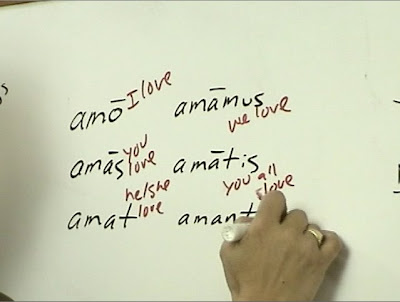 And, at the end of the lesson, there is a little "skit" where they apparently hot glued metal hangers to the back of their toys and act out some story, throwing in the occasional Latin words. Oh no, that's not Ariel... that's Rational Rhonda, along with her friends Innocent Iris and Ferocious Frankie. And the teacher/dad did all the voices, apparently really mastering the high falsetto, which might sound cute if he's your dad, but to me it sounds a little creepy. 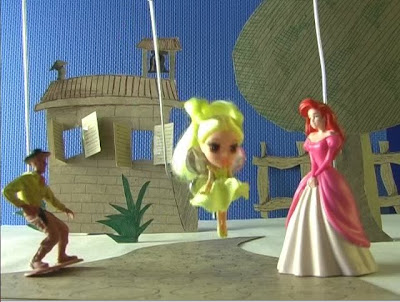 The thing is... when I watched the chapter 1 lesson, I was alternating between an extreme urge to fall asleep and an urge to laugh hysterically. Neither of which are necessarily good environments for learning. And I have to admit... it's kind of scary. It's like Little House On The Prairie- scary. (sorry you LHOTP crazy people) Perhaps if I'd watched LHOTP, I'd be more accepting of these DVD lessons.

I suppose I'm gonna to have to be the one to teach Latin.

Yes I know I'm a homeschooling mom, and with that comes certain assumptions about the way I am. Admit it... homeschooling moms are supposed to sew their kids' clothes and dress like this...

But I prefer wearing my cute Hot Topic tees with some Gap jeans. And instead of sewing clothes for my kids, I'm playing Xbox 360 with them. Actually Xbox 360 is a very efficient homeschooling tool, improving hand-eye coordination, teaching race car driving and shooting/blowing up enemies. Ok, forget that last part.
But Rock Band counts as music education, doesn't it?

Email ThisBlogThis!Share to TwitterShare to FacebookShare to Pinterest
Labels: homeschool