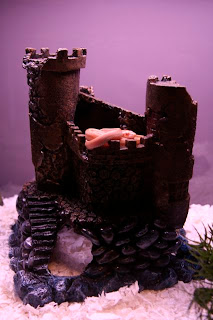 Thank you for all the well-wishes. I’ve managed to weather another day on the couch being taken care of my by very capable husband. I have no idea how tomorrow will go as I don’t feel much better. And since you’re so nosey... don’t tell me you’re not.... you’re having all these thoughts in your head like “what is wrong with her to have several days of bed couch rest without telling us what is going on?”

Ladies and gentle viewers, I am suffering from the body of a 91 year old woman. Yep. Calf muscle cramps that trigger my sciatica (a condition I became very familiar with in my pregnancy with Haven), add to that general achy-ness and flu-like symptoms, some major insomnia, and the fact that mother nature handed me a big monthly present in the middle of this all. And these monthly “presents” are getting worse so I’ve been directed by my doctor to get a laparoscopy in the next 12 months to see why I’m getting such severe cramps and other not-so-nice side effects. Think first Egyptian plague meets Niagara Falls. Yep.

Throw these all together at the same time, and I’m lying down on the couch watching the clock tick by until my next dose of triple Advil is allowed. Then I watch the clock for the next 30 minutes waiting for it to kick in. All the while shaky and jittery from my severe lack of sleep. Fun week I’m having! Oh, and did I mention that Marshall has to work the rest of the week? So if the kids stay in their jammies all day long, try hard not to judge me. At least they will be getting transfat-free peanut butter sandwiches for lunch. After the Pop-tart breakfast, of course. And perhaps another course of Pop-tarts for dinner.

Now on to the picture:
Our juvenile corn snake, Neville Longbottom loves to hang out up there in the top of his castle. You could say he’s definitely King of the Castle. Don’t all corn snakes live in castles anyway? Except for his sister that lives in a pirate ship. But is she really his sister, just because they both belong to our family? Cause that might make it just a tad awkward when it comes time to breed them together in a couple of years. Well, I guess in some family histories those things actually happened. And by “some”, of course I mean “my”.
at 7:25 PM