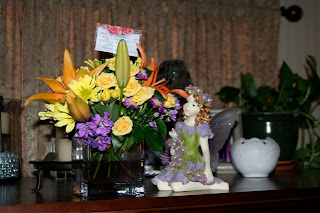 Last night is the first night I’ve “slept through the night”, meaning I fell asleep sometime before midnight and slept until past 6am. For someone who usually needs 9 hours/night, I was very thankful to finally have gotten a full 6 hours of sleep. Because for the previous 7 nights, I would fall asleep around 11:30pm, only to wake up anywhere from 1:30am to 3:00am, and unable to sleep any more, despite my deepest desires to do so. Believe me, I’m all over the Ambien, but it wasn’t helping at all. Two nights ago I even tried Nyquil nightime cough relief (because I had developed a cough and didn’t want something ELSE to keep me from sleeping). Now, I’m a woman who can usually hold my liquor 2 glasses of wine (with food), but the 2 Tablespoons of Nyquil knocked me on my rear, feeling miserably drunk all night (and STILL unable to sleep). Grrrr.

Whatever my problems were, it seems like the good old fashioned flu was thrown in, as I was laid off my feet for most of the day for 8 days in a row. While Marshall was off work and able to help out Monday and Tuesday, he did have to work Wednesday through Friday. Which meant that I was on survival mode. The kids stayed in their pajamas from Tuesday night until this morning. They didn’t seem to mind much, as they still played and had a great time. They survived on poptarts, peanut butter sandwiches and more poptarts. Haven helped a great deal, even putting his little brother and sister down for naps. He would help feed his sister at mealtimes while I rested on the couch. He would even help his little brother go to the bathroom. He did draw the line at his sister’s diapers and I could hardly blame him. I was able to manage those myself.

To help make the time go by a little faster, we watched round the clock movies until Daddy got home from work at 8pm. Little Mermaid I and II, Harry Potter movies 1-5, Empire Strikes Back and Return of the Jedi were squeezed into 3 days. Seamus and Marlie didn’t care about the big-kid movies much and ran and played around the house, wreaking havoc as they went. Though, honestly, if you tell them to clean up, they will make it a team game and will put away all their toys unsupervised. I’m very lucky, I know.

Though I was lame-o parent0 during the past few days, I did get really good cuddle time in with each of the kids. Lots of time on the couch means lots of time to cuddle with Mama. Each kid asked for cuddle time and each kid got it.

I’m still not at 100%, but I can handle doing the necessary household and parenting duties that I’ve been neglecting. And while I wouldn’t recommend going through this as a “diet”, I did lose 6 pounds during this ordeal.

My in-laws sent me a lovely bouquet to lift my spirits, (see above picture) which it definitely did. The water in the vase was tinted purple, which is very cool. I put it next to my purple fairy on top of the TV armoire, so I could look at it, in between wand and light saber duels.
It feels like I’ve definitely turned a corner and I’m hoping to feel back to normal in the next day or so. Then I can enjoy the kids more, and they can enjoy me more.

On a side note: During this ordeal I’ve discovered that the Food Network makes a very nice babysitter for the kids, where you don’t have to feel as guilty about using TV as a babysitter, and it might just pay off big time when they are older. (and cooking for me)
at 7:23 PM