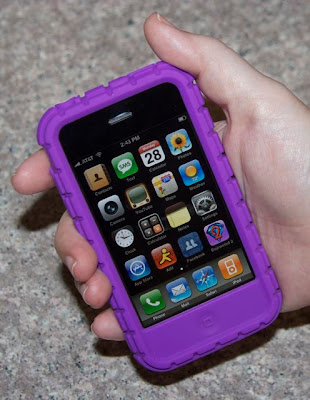 That's right! I finally got my hands on the iPhone. CAUSE I GOT TO THE MALL AT 6AM AND WAITED UNTIL THE APPLE STORE OPENED. And it was kind of worth it. I was actually first in line. So I sat my hiney on the comfortable hard, granite floor, pulled out a book, and waited. Fortunately for me, Apple is now opening their stores at 8am to deal with iPhone customers. And no I didn't leave the kids home alone or anything. Marshall had the day off work.

I'm totally loving the phone. It's even got GPS built-in, so I can have it pinpoint my exact location, just for giggles. The best part? When the Xbox 360 is otherwise occupied by another family member, I can still play Bejeweled!

So, uh, you might've heard we had a little earthquake in the city of angels today. Yep we did. 5.4 magnitude. How did we react when the house started shaking? Well, we weren't home when it happened. You see, we were in the car, on our way to the LA Arboretum. (which is totally awesome, by the way!) Marshall (who was driving) told me later that he felt the van shaking when we were on the freeway off-ramp. He looked back to see if Haven was shaking the car, then looked at the trees to see if it was a strong wind or something. He was a little puzzled, but didn't say anything. Me? I was hunched over in the front seat, playing with my iPhone... surfing the internet, checking email, updating my Facebook status, etc. Didn't notice a thing, actually. I didn't even know there had been an earthquake until I was checking email on my handy dandy iPhone and saw the frantic Facebook messages and voicemail from my sister.

After we finished with lunch, we headed back to the house to see if there was any damage. And you know what? My Buffy the Vampire Slayer action figures were knocked off the shelves. How rude! Just a few things, here and there were knocked over. No cracks in the walls, nothing broken. You see, I've got most of the breakable things secured to their shelves with earthquake putty. That's what you do out here for precautions. I've got the childproof latches on all my upper kitchen cabinets. Not because the kids can reach up there (they can't), but so I don't lose all my dishes in an earthquake.

In the almost 12 years I've lived here, this is the first earthquake we've had that's actually been strong enough to knock things off shelves.

Email ThisBlogThis!Share to TwitterShare to FacebookShare to Pinterest
Labels: gadgets