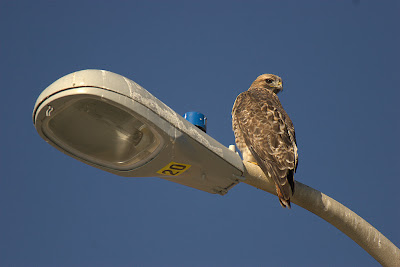 So late last week Marshall had the day off and we were taking a family walk around the neighborhood, like we love to do in evenings and days off. This time, we spotted a hawk sitting on a city light pole at the end of our street. Wildlife is rare in our suburban Los Angeles neighborhood, except for ‘possums and the occasional raccoon.

We said, “Hey look kids! There’s a hawk! And OH! He’s caught something and is eating it on top of the light pole.”

It was too high up and the since the sun was setting behind us, we couldn’t see what kind of animal he had on top of the light pole. We stood there for a few minutes admiring the hawk and thinking it was cool that we were watching him eat his “catch.”

Last night we realized that we haven’t seen our gray bunny since that evening. YIKES!

We might have witnessed the devouring of our fuzzy wuzzy bunny Willow and we were standing there admiring the murderer! The horror!

Hey you know our local pet shop has a whole new shipment of very cute bunnies. I’m not suggesting we get some non-neutered bunnies that can reproduce faster than the hawk can pick them off or anything. That would be distasteful. (for me, not the hawk)
at 3:20 PM