Pirates Who Don't Do Anything 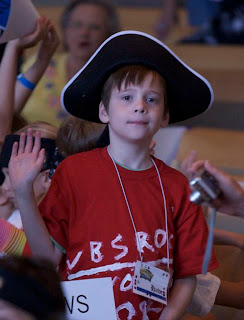 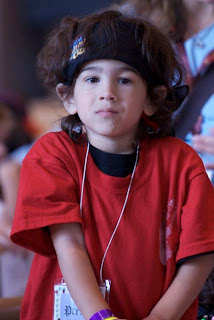 This past week was Vacation Bible School at our church. It happened to be the first year that Seamus was old enough to attend. Appropriately, this year’s theme was Veggie Tales, “Pirates Who Don’t Do Anything”. For a little boy who lives, eats and dreams pirates, this was a great way to start off the VBS tradition.

While I love VBS and our church normally does such a bang up job, it was a relatively painful week. I’m talking about having to wake up at 7am every morning. Yeah, I know I’m not getting any sympathy from you all. For a Mama who’s used to waking at 9am every morning (yes my kids sleep past 9am!), an entire week of 7am get-ups is not fun. But hey, I endure the torture sacrifice for the sake of my kids.

It was nice to get the 1:1 time with my girl while the boys were at VBS. She enjoyed the time, but she definitely missed her brothers. The highlight of her day was always picking them up at lunch time.

Apparently this year, the kids got hole punches in their name tags for memorizing Bible verses or doing good things for other people. Seamus’ teacher told us that he had more “punches” than any other kid in the class. That’s my boy! While he did love his first VBS experience, he was not diggin’ the Celebration Day performance, where he was supposed to sing with his class, on stage in front of the parents. As soon as the song started, he started crying uncontrollably. He was scared and nervous. He ran off the stage and into the arms of one of his teachers. Fortunately he was in the front row, so it wasn’t noticeable and didn’t disrupt the performance. Marshall crept up to the front (dodging the parents’ cameras and camcorders) and scooped Seamus up, bringing him back to where Marlie and I were sitting for the rest of the show. He and I snuggled until all the classes were finished performing. Perhaps “show business” is not for him. He definitely doesn’t like big crowds or having all eyes on him.

On a completely different note, today Marshall did something incredibly selfless and drove us all to San Diego for the day, to attend the Reptile Super Show. Marshall doesn’t much care for reptiles, so he was definitely doing it for me and the kids. The kids and I had a total blast. It was a reptile-lover’s dream! There were more snakes than I’ve ever seen and in every color and pattern imaginable. I was seriously tempted to come home with an Emerald Tree Boa.

Marshall’s wondering why we never went through with the plan years ago to buy a Leopard Tortoise. Because they are super cute... though they live over 100 years, which means our kids would inherit it. Marshall thinks it would be awesome to have a tortoise in the backyard with our bunnies. Something about the tortoise and the hare....

Oh, and if I ever decide I have too much free time on my hands and I need to take up a new hobby... I’m totally going to get some of those poison dart frogs. One of each color.
at 9:02 AM

Email ThisBlogThis!Share to TwitterShare to FacebookShare to Pinterest
Labels: fun things to do, Haven, Seamus