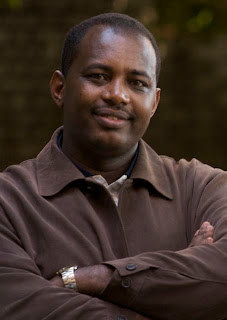 Our adoption agency has an annual reception in the U.S. for Dr. Tsegaye, WHFC’s in-country representative from Ethiopia. Last year Dr. Tsegaye brought a government official with him, Dr. Kebede, who wanted to see how the Ethiopian children are doing in their new families. Incidentally, my association with Dr. Kebede is what led to the whole business of me being suspected of being a spy for the Ethiopian government. Well, the whole spy story has taken an interesting turn...

This year, Dr. Tsegaye brought President Shiferaw Shigutie with him to the reception. He’s President of the entire southern region of Ethiopia. (SNNPR) He’s kind of like a Governor, except they give him more respect than we give our Governors. They refer to him as “His Excellency”. Of course, I was shooting the breeze with him, laughing and joking around with him, only later realizing how others were addressing him. I’m sure I broke all kinds of protocol by not giving him the respect he deserves. He’s a very kind man though, and hopefully will not hold my ignorance against me. It’s wonderful to speak to another Sidama person about the history and culture of the Sidama people. He is proud of his Sidama heritage and is committed to helping the adoptive parents of Sidama children to have access to other Sidamas, so we can teach our children the history, culture and language of the Sidama people. While Sidamas are Ethiopian, they have their own culture, clothing, food and history than what most people consider typical Ethiopian. It was truly an honor to get to meet President Shiferaw and to have had the opportunity to monopolize so much of his time during the reception yesterday. He is a wonderful man.

I’m especially interested in being connected with other Sidamas, since my last attempt went horribly wrong. In fact, during the reception, Dr. Tsegaye suggested I tell the entire “spy” story to President Shiferaw, including the part about how the political men read my blog, and posted what I wrote in their yahoo group, along with their angry response. (turns out I have a spy of my own, who told me about it) After I relayed the information, President Shiferaw asked me to email him my blog post. Uh... let’s hope President Shiferaw has a better understanding of my sense of humor than the angry political men.

Anyway, as it turns out, President Shiferaw knows the main political man who suspected me of being a spy. (of course) This man has moved back to Ethiopia. (let’s call him “guy-who-didn’t-like-me”) It appears as though he’s put aside his differences, to work with the government for the benefit of the Sidama people. Which I think is a very good thing. I have a big heart for the Sidama people too. They are my daughter’s people, which means they are my relatives too. During our talk, President Shiferaw invited me to come to Ethiopia for the upcoming Sidama New Year (Fichchee) celebration, to mend fences with “guy-who-didn’t-me” and find a way to work together for the benefit of the Sidamas.

While I am truly honored by his invitation, something tells me that “guy-who-didn’t-like-me” will have a hard time changing his impressions of me, and I’m not sure how productive we would be together. Who knows, maybe President Shiferaw won’t want me to come to Ethiopia after he reads what I wrote. I’m not sure if the invitation still stands, but I was in the middle of stuttering about needing to care for my children when we were interrupted. Perhaps childcare can be arranged. It certainly is tempting, as I long to return to Ethiopia. I don’t know what I could do for the Sidama people though. I think President Shiferaw thinks more highly of me than he should. I think “guy-who-didn’t-like-me” would probably agree with that statement.
Honestly... I never thought I’d be suspected of being a spy; write a post that angered a bunch of political extremists; and have the President of the southern region of Ethiopia invite me to Ethiopia to meet with “guy-who-didn’t-like-me” and work together to help my daughter’s people. I don’t know how these things happen to me.

I’m just a simple housewife. Really, I am.

**UPDATE** If you came to my blog from an Adoption Reform blog, please CLICK HERE to read my response.
at 9:10 AM