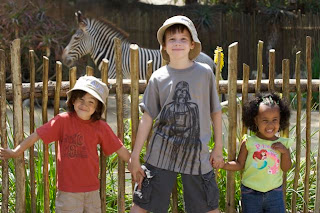 Oh wow... such strong language from me, I know. Sorry about that.
It’s officially summer around here, and Marshall’s work load has been pretty light. So we do what any financially irresponsible fun parents would do, and we try to find more ways to spend money having fun. We recently did the Pirate Dinner Theater, which was loads of fun, and much more fun than our memories of attending Medieval Times in our pre-kid days. But... the Medieval Times is running a special, where kids are free. Or more specifically, ONE kid is free per adult paid ticket. Like the Pirate Dinner Theater, kids under 3 are free, so we figured we’d take the family to Medieval Times for the discounted price. I called the Medieval Times operator to discuss reserving tickets for that evening’s performance. Let’s call her “Attitudinal Operator”.

Attitudinal Operator: “Children under 3 are free, but your daughter will have to sit on your lap and will not get any of her own food.”

Me: “She doesn’t get her own food or her own seat?”

Attitudinal Operator: “No, you will have to buy a child’s ticket ($35) in order for her to get her own food and seat.”

Me: “We just went to the Pirate Dinner Theater (next door to Medieval Times) and children under 3 were free, but they got their own seat and food. Aren’t you guys the same company?”

Attitudinal Operator: “We are NOT the same company. WE have been in business for over 20 years.”

Me: “My mistake. What kind of food is on your kids platter?”

Attitudinal Operator: “We do not have a kids platter. The kids are served the same food as the adults.”

Something tells me my kids won’t appreciate being served spare rib and tomato bisque soup.

So, with Medieval Times, there is no special kids platter, kids under 3 are free, but don’t get their own seat or food, and you are limited to two sodas per person. (Pirate dinner theater gives you unlimited sodas, a special kids platter and kids under 3 get their own seat and food)
Even with the “promotion”, we decided against Medieval Times. Apparently the fact that they’ve “been in business for over 20 years” means they don’t have to try.

Sooooo.... we went to the zoo! And we had a blast. We renewed our yearly membership, and we still spent less money. Take that, Medieval Times! Next time we have the urge to go to a dinner theater, we’ll go back to the Pirate Dinner Theater.
at 9:47 AM