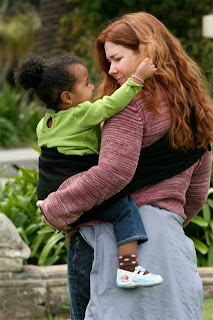 November is National Adoption Month! Did you know that? This month I will include some new and old posts about adoption. This post first "aired" June 8, 2008.

Alexa, Seamus’ birthmom, spent Saturday with us, and we had a wonderful time with her, like always. We love her!!!! She loves reading my blog and she’s pro-adoption, so she figured she would like to start a blog as well. I think she would have a lot to say since she is a birthmom and an adoptee. (I’ll announce her blog once it’s up and running) Anyway, she asked me to email her some links to blogs of other adoptees and birthmoms, who are largely “angry” adoptees and birthmoms. Alexa would like to see what they have to say before she starts writing about adoption.

So I’m clicking links here and there, and then I click on a blog and look at the picture of the blogger. I know this woman. She was a fellow Gymboree mom and her son was in Seamus’ Gymboree class. I remember her mostly because her son was a holy terror and she was sugary sweet, almost inappropriately so. Seamus was enrolled in that particular class when we brought Marlie home. Since he still had four months to go, I just wore Marlie on my hip in a sling and did the class with Seamus.

Well, since I “know” this mom, I decided to check out her blog. Didn’t take me too long to see that she’s an angry adoptee that hates adoption. I looked at her “adoption” posts in her archive, and low and behold... there is an entire post written about ME. Yes, that’s right. ME. What are the odds I would randomly come across a post some acquaintance wrote about me? You wanna know what she wrote?


"For those of us who've been unbrainwashed by seeking and finding the truth about adoption, it seems especially odd for a mom of two sons to seek other children to adopt. This week, at one of my son's classes, a white adoptress had a black baby in her sling. Either she changed dads since the boys or she adopted, I thought. I found out soon after seeing her that she, a la Madonna, has a little black baby that is not hers, and will never be hers, riding on her hip. Funny how one never seems to see a black mom or adoptress (or both) with a white baby on her hip. Nonetheless, the Madonna adoption complex seems to have hit L.A. It's a real shame.

I have a real problem with someone who not only takes someone else's child and pretends to be the mother, but who seems proud of her legal kidnapping. I find, however, that many people have been so brainwashed by the $1.5 billion adoption industry that they rejoice when an adoptress takes a child.

Most people are so glued to the television that they've lost their intuition, the intuition that says a mom and baby belong together. In the rare circumstances where a mom and baby need to be separated, let's call a spade a spade and not pretend that the family who raises the child is the child's real family."

Wowsers. Obviously she didn’t know I had adopted Seamus too, or she probably would have put a bomb in my car. Come to think of it, she’s probably the one who ripped my pro-adoption bumper sticker off my car when it was parked at the mall for Gymboree class.

I’m not the only one she slammed in her blog. She apparently also mentioned Cheryl Crow:

"I'm as disappointed in Crow's decision to rip apart a natural family as I was in Madonna's. I'd always thought that Crow had some kind of respect for family, but evidently I was wrong."

Interestingly, she calls herself a “Thinking Mama” and describes herself as a “homeschooling, breastfeeding, Lesbian who is happily married to a man.” I swear, I’m not making this up. She has a second blog (linked from her first blog) that is devoted to writing about being a Lesbian, while being happily married to a man and all that goes along with that. Apparently she does not agree with forming families in “unnatural” ways (which includes adoption) so she made the decision to marry a man so she could have a family. She says she thinks she is a Lesbian because of the absence of a “mother” when she was growing up. And by “mother” she means her birthmother, because she was raised by her adoptive mother.

Even though her post is from July 2007 (back when we were still in Gymboree), I’m seriously tempted to comment in her blog. “Oh, hey! That’s ME your talking about! Thank you for unbrainwashing me with your insightful post. I now know I’m a horrible person for ripping natural families apart. Someone should smack me.”

All kidding aside... I’m sorry Angry-Lesbian-Gymboree-Adoptee feels that way, but I don’t need her permission to be a “real” mother to my kids. When they run to me and I scoop them up in my arms, it is real. Real for them and real for me. The bond I have with my younger two, who I adopted, is the same bond I have with my older one, who I gave birth to. The simple yet profound bond of a mother to her child.