Bunnies, Kitties and Dog. Oh My! 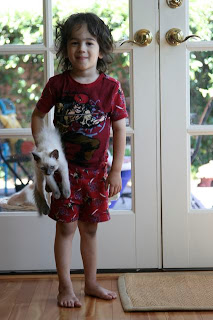 You may think we’re a bit nuts with the animals, and you may be right. Some of you have asked if we’re building an ark. Uh, yes. We have inside information I can’t talk about. And we’re preparing for a new world that will be apparently overstocked with cats. Anyway, this new kitten is so cool. As evidenced by the above picture, this kitty will let you carry it around like a stuffed animal. Seamus frequently walks around with this kitty under his arm. Our other kitties don’t like to be carried, so the kids are just delighted about holding Lupin. Yeah, I tell them to go ahead and carry him while they still can. I’d like to see a picture of Seamus holding him when he’s reached his full 20 pound capacity. The only trouble is that the boys are constantly fighting over who gets to hold Lupin. There’s only one solution I can think of to solve that problem. Yes, I know. Someone needs to stop us. I will say that despite having more pets than average, I am obsessed with cleanliness, cat hair and litter box odors. I even choose my cat breeds according to their shedding potential. Our one real shedder is an outside kitty. If you come over to my house, you will not find pet hair on the furniture or scratched up furniture, and you will not see or smell the litter box. In fact, you can be allergic to cats and as long as the cats are put away, you will not have a problem at our house. Just ask Anil.

You could say we have a lot of pets. Current count is 9 (4 cats, 2 bunnies, 2 snakes and a fish), or 16 if you include the ladybugs. We’ll probably let them go soon, but the caterpillars should arrive any day now. And in case you’re confused by a previous post, I’m not against all bug habitat kits. I’m just against creepy bug kits that you have to euthanize in your freezer because the bugs can’t be released outside. Ladybugs and Butterflies... nice bugs. Roach-like beetles? Not so much.

In case you’re dying for an update on the bunnies... they are doing well and are thoroughly enjoying the backyard. They run up and down the ramp in and out of their cage anytime their little hearts desire. Wherever the bunnies are, they are always together, which is super cute. If I turn on the backyard lights at night after dark, I’ll often find our outside kitty, a large opossum (who comes every night to eat leftover cat food) and the two bunnies all running around together. All peacefully co-existing like something out of National Geographic. The only issue is that now the bunnies keep eating our cat’s food. I’m pretty sure bunnies aren’t supposed to be carnivores, and I’m slightly concerned that this new habit of eating cat food will turn them into some meat-eating Monty Python mutants.

Are ya wondering whatever happened to that loud barking dog that belongs to the Angry Armenian Dude? Well, just as I figured, he didn’t take my complaint seriously. Probably because I’m a woman. And the barking continued. So I wrote a little note to the Animal Control in the form of an official dog barking complaint. And of course I wrote it in Marshall’s name and had him sign it. He’ll sign anything I stick in front of him and tell him to sign. I really should take advantage of that one of these days. Hmmmm....

Oh, yeah, the dog. Well anyway, Angry Armenian Dude got an official letter from the City of Los Angeles, dated May 30th, informing him of the noise complaint made against him. Take that, angry Armenian Dude! Hee hee. His letter basically told him he needs to “take immediate steps to abate this condition”. Yeah, I have no idea what that means either. You would think with all the immigrants in Los Angeles, that they’d word it in such a way that’s a little easier to understand, for those who do not speak English as a first language. Something more along the lines of, “Shut up your dog now”. Anyway, any time after June 15th, I can submit a second complaint if the barking continues. But then we’d have to meet in person with a mediator and Angry Armenian Dude, and we’d have to provide some sort of proof in the form of names/addresses of other neighbors, logs, audiotapes, etc. Which sounds like a bit of a nightmare. Ironically, as I’m typing this... the dog just started barking. Quick... where is my audio recorder? Actually, at the risk of totally jinxing myself, I will say the barking problem has improved dramatically, since he received the letter. Let’s just hope whatever they are doing to keep the dog quiet is a permanent fix.

In the meantime, we’ll just keep building our little ark.
at 9:30 AM