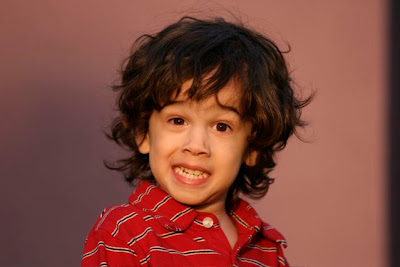 Marshall was home yesterday, so we took advantage of the situation by going out to lunch and walking around in the mall afterwards.

Have you ever seen Ed Hardy clothing? The hip T-shirts with the tattoo-style designs on them? Well our mall has a new Ed Hardy store. Marshall is familiar with them because when he was working on Rambo, Sly wore them all the time.

So, you know, we just got our tax refund and we’re feeling kinda generous. Marshall sees a T-shirt in the window that catches his eye, so we decide to go inside.

Marshall starts checking out the clothes while I stand off to the side, holding Marlie. Haven and Seamus sit on the nearby bench in the store, with their arms around each other. Haven got tears in his eyes and started telling Seamus how much he loves him. Seamus told Haven he loved him too. It was some serious cuteness going on there, watching the love between those two brothers.

Meanwhile Marshall locates the shirt he had seen in the window and holds it up to show me. It’s definitely cool looking. He gives me the “should I get it?” look. And I give him the “go ahead” slight head nod. Yeah, we both know these are designer T-shirts and they will probably be like $60 or something, but heck... we’re feeling generous. You know, tax rebate and all.
Marshall tells the guy he’ll take it. The guy asks if Marshall wants to try it on first. Marshall say, “No, I’ll just get it”. The sales guy is pretty surprised, but says, “Ok” and judging by his facial expressions, he thinks we’re nuts. And we laugh to ourselves at the sales guy. Silly sales guy... we are in a generous mood, and yes we will buy the expensive T-shirt without trying it on.

Marshall went to the register to pay for the shirt, while the kids and I went next door to Yankee Candle. That’s a store I can’t go to without spending a lot of money. And they had a bunch of new fragrances since the last time I was there. I started my little pile of scented wax tarts as I perused the aisles. Suddenly Marshall joins us, looking a bit pale and like he’s about to be sick.

Marshall: “Guess how much that shirt was.”

Marshall: “No” (Marshall says in a tone of voice that implies I’m not even close to being right.)

At this point I’m not really liking this guessing game we are playing, so I just sit there waiting for him to tell me the amount he paid for the shirt.

I was completely speechless for a minute or two, and then said, “It’s simple. You’ll just go right back there and take it back. What does the receipt say about the return policy? You can just tell the guy your wife freaked out and made you return it.” Marshall turned the receipt over and read the return policy. “No refunds. Exchanges or store credit only .” At that point, I was feeling a little sick to my stomach too. Then I said, “I can’t believe you didn’t look at the price tag.” and Marshall said, “I can’t believe I didn’t look at the price tag. I’m really sorry.” And I said, “I assumed you looked at the price tag.”. And, well, we all know what happens when you “assume”.

All of the sudden, I wasn’t in the mood for spending more money, even at Yankee Candle, so I put my pile of scented wax tarts back. Marshall was no longer interested in visiting the Mac store, so we just headed home. Marshall was feeling horrible. I was feeling horrible. Hardly a word was spoken on the drive home. (except for ordering the obligatory Dr. Pepper from Jack in the Box)

Marshall had already assigned his recent Photoshop purchase as his “Father’s Day” gift, so after we were home he declared that he wanted this Ed Hardy shirt to be his Birthday gift. Seeing as though his birthday is in October, I informed him that was ridiculous. I was not going to allow it to be his birthday present.

Then I suggested he wears the shirt every day until it wears out. If someone questions him, he can just tell them how much he spent and how he’s trying to get his money’s worth. That idea was met with a groan. Besides, he still has not tried on the shirt for fear that it won’t fit or that he’ll look like a dork in it, and feel even worse about the purchase. Perhaps we should just frame it and hang it on the wall for art.

And then it hit me... I know how to make it all better. I have the perfect solution that will ease Marshall’s guilt and my frustration...

And see? I’m going to end up with my three snakes after all, and I never had to agree to the Nissan GTR.
at 11:47 AM