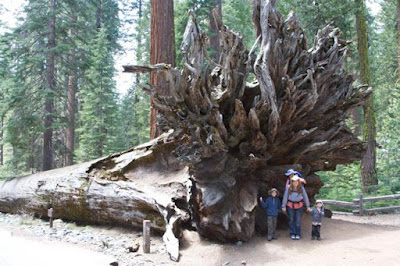 We just returned from our 6 day trip to Yosemite. Boy was it fantastic! We did have a couple of glitches though. Half way to Yosemite I realized I had forgotten my tempur pedic pillow. The horror! Though, thankfully I remembered the Benadryl. So while I didn’t sleep well during the trip, the kids slept fantastically. Also, the time-of-the-month fairies decided that “Aunt Flo” should accompany me on the Yosemite trip. Third year in a row. And if you have no idea what I’m talking about... I really can’t help you there. You try tending to your feminine needs while walking on a trail in the middle of Yosemite. Not easy.

We stayed in a 2 bedroom, 2 bath, rental house with a loft. The loft was huge, with two twin beds and plenty of space between them, in which we placed Marlie’s crib. The kids had a blast all sharing a room together. There was a spiral staircase that led down from the living room into the master bedroom suite. In the evenings we would make our own dinner in the kitchen and eat in the dining room. Afterwards, Marshall would hook up my iPod to the TV so we could play a movie for the kids before they went to bed. The first morning in Yosemite, Marshall and I woke up with a serious case of altitude sickness. One of us ventured upstairs to turn on Cartoon Network for the kids so we could lay in bed and get some sleep. And this is one of the many reasons why we don’t camp on the Valley floor.

We started off the week visiting the Sequoias, which are the tallest trees in the world. Even though this is our third visit to Yosemite, it was our first trip to see the Sequoias. They were memorable for sure. Even more memorable, however, was the bathroom at the Sequoias. Inside the bathroom stall, they had a plastic molded toilet situated over a hole that went who-knows-how-far-down. All I know is that when you sat down on the toilet, you were blasted with cold, Arctic air, blowing up from the hole. Nearly froze my girly bits off. Took me a good 15 minutes in the car (with my seat heater on) to fully defrost.

We used one of those heavy duty backpack carriers for Marlie this year. I was the pack mule for the trip, carrying Marlie and the supplies for the family. Marlie loved it for the most part. One day, after hiking nearly 2 miles on a warm day, I started hearing pre-wretching sounds from Marlie. I asked Marshall to check on her and he promptly decided we should take our green-hued daughter out of the carrier. After giving her some water and letting her walk a little on her own, she regained her normal color. Crisis averted. Something tells me the other passengers on the shuttle bus wouldn’t have wanted to sit next to me if my daughter had wretched all over my hair and back.

We enjoyed food at some of the restaurants, picnicking and eating dinners at home in our rental house. Oh and never eat at the Mountain Room Restaurant. Unless you like paying fancy steakhouse prices for average-tasting food. And unless you like finding white fuzzy stuff growing on the fruit on your kids’ plate. Not kidding. Wish I was.

We saw lots of wildlife on our trip. Mostly squirrels. But we did see a coyote next to the sidewalk and lots of deer. The master bedroom in our rental house had a door to the outside, and one night a bear was rummaging around outside our bedroom. I got up from bed and was about to open the door to investigate but Marshall asserted his husbandly authority and yelled, “DO NOT OPEN THE DOOR!” Good thing too. Because as soon as I re-locked the door, I heard two paws hit the door. And then proceed to scratch at the door and try to get in. Kept at it for a while too. Not easy to fall asleep when a bear is trying to get in the house.

We did see snow, which for Southern Californians, is very exciting. There were patches of snow on the sides of the road throughout Yosemite. We even saw a big patch of snow in the neighborhood where our rental house was. So of course we stopped the car, let our kids out and had a big snowball fight. Mainly between myself and the boys while Marshall took pictures. Marlie had a big temper tantrum early on in the snow exploration and therefore watched the snowball fight from her carseat. This was our kids’ very first experience playing in snow. And they loved it. For about 15 minutes. Then they were cold and wet and ready to go back to the rental house.

The kids were absolute troopers and had a blast on our trip. Marshall and I left with a renewed determination to make this a yearly family vacation. Hopefully next time I can leave Aunt Flo behind.

Check out our Yosemite pictures here, and be sure to keep checking Marshall’s blog for his fancy shmancy Yosemite pics. He has some good ones!
at 11:25 AM

Email ThisBlogThis!Share to TwitterShare to FacebookShare to Pinterest
Labels: fun things to do, vacation