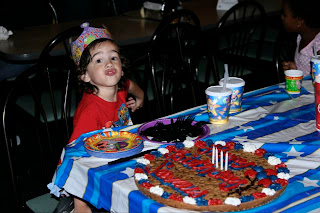 Our big pirate (A.K.A. “Captain Shea Beard”) turned 4 on Saturday! We had a big small party at Chuck E. Cheese. I was so excited his birthday fell on a Saturday, and that we could have the party on his actual birthday, that I failed to notice it was a holiday weekend. So, out of the 25 invited kids, only 7 could make it, but we still had a fantastic time. And of course by “fantastic” I mean, I didn’t have to set up before, or clean up afterwards. That’s the best kind of party in my book. Seamus still had a great time, despite the smaller guest list. He loved riding all the rides and insisted on wearing his birthday crown for the rest of the day.

First thing in the morning, before Seamus woke up, Marshall went to the Party Store to get balloons (pirate balloons, of course) and then stopped by Starbucks (a favorite family treat) to pick up breakfast for everyone, including a big chocolate donut for Seamus. Once Seamus woke up, he opened his gifts and then we brought him into the dining room to see his BIG gift, which was a shiny, new red (his favorite color) dirt bike with training wheels. After the party, Seamus and I went outside to try out the new bike. Once he got the hang of it, he was biking like a real pro.

The usual rule in our house is that birthday person gets to pick what he/she wants to eat, what restaurant to go to, etc. on their birthday. Seamus was firm about wanting to eat a poptart for dinner on his birthday. So... he ate a poptart. Judge me if you must. He enjoyed it. And if you’re keeping track of his menu for the entire day, he had a chocolate donut for breakfast, pizza and cookie cake for lunch (with Sprite), poptart for dinner, and more cookie cake for dessert. And yes, we’re fully aware of what that level of sugar does to our normally hyperactive boy. We had a glass of wine or two and took pictures. It’s all good.

Happy Birthday, Captain Shea Beard. We love you!
at 11:03 AM

Email ThisBlogThis!Share to TwitterShare to FacebookShare to Pinterest
Labels: Seamus