A Pirate's Life For Us 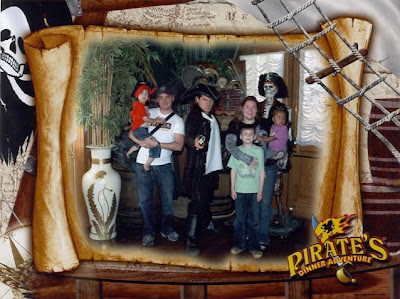 When I sat down with Seamus on the morning of his birthday and explained to him how he could pick any restaurant or kind of food he wanted us all to eat for dinner, he was quiet for awhile, and he thought about his answer. Then he looked me in the eye and said, “I want to eat with pirates, where pirates are fighting.”

Little did he know that there is actually a Pirate Dinner Adventure (like Medieval Times, but with pirates) an hour away from our house. With the short notice and the 3 and 1/2 hour long “adventure”, it was not possible to do the pirate dinner the same day as his birthday and birthday party. However, three days later we were able to make his pirate wish come true.
When we arrived, they made us take the cheesy staged picture you see above. (which of course we bought) Then we entered the tavern for unlimited appetizers and a pre-show. Marlie decided that pirates are very scary people and would cry and scream like a banshee when one would approach the table to say hello to the kids. That is... until she saw the Princess. Then she decided this whole adventure thing was fun. A Princess changes everything.

When you arrived, you were given your seat assignment, which included a color and a table number. The dinner theater was divided into six colors. At the end of the pre-show, a pirate wearing a certain color would then escort all the guests with coordinating colored tickets into the correct section for the dinner show. The colors were red, orange, yellow, green. blue and purple. Can you guess which color we were assigned to? Yep. Purple. How did they even know??? So our purple pirate escorted us to the purple section of the dinner theater when it was time for the dinner and show to begin. The different colored pirates would do various acrobatic feats and would compete against each other. It was our job to cheer on our particular pirate. So we screamed our loudest for the purple pirate. He apparently noticed us, because he picked Haven to ride in the boat with him (in the water around the pirate ship/stage) as a co-treasure hunter during the show. Later, Haven was chosen again to go backstage and dress up in a uniform and was part of the last battle in the show. Seamus was offered the chance to participate twice as well, but both times said no. He has since told me that “next time” he will say yes if they ask him to participate.

The price for the whole family is close to the price of that ridiculously expensive theme park... you know, the one with the mouse? And they kept throwing the “extras” at you... Here’s a great family picture of you... that will be $20. Oh, your child participated in the show... and we got a picture of him in his costume.... another $20. Oh, the servers’ tip is not included in the ticket price... we suggest a $20 tip for a party of 5. But the food was aplenty and pretty tasty. And the fun factor was very, very high. Much more fun than Medieval Times. I mean, the pirates were acrobats! Every last one of them. And they had a gypsy girl who spun around, suspended high above the pirate ship by her neck... along with other pretty impressive feats... all without a net.

We felt pretty attached to our purple pirate, and after the show he agreed to pose with the boys for a picture. We TOTALLY had the best pirate. He could out flip all the other pirates. Marlie was VERY excited to meet the Princess after the show and waved and blew kisses to her. And we just HAD to stop at the pirate gift shop and get piratey souvenirs for everyone. (myself included) I could have spent days in that gift shop.

That was definitely a family treat! The boys started begging to come back before we even walked to our car and have continued to beg us to return ever since.
This “Patch-Eye Pirate Mama” can’t wait to return either! 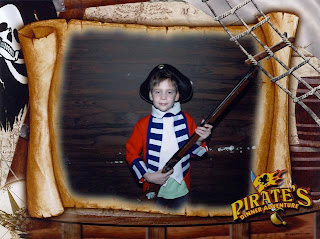 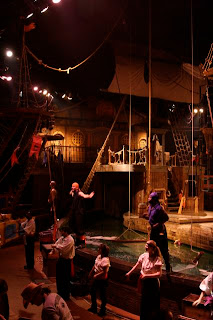 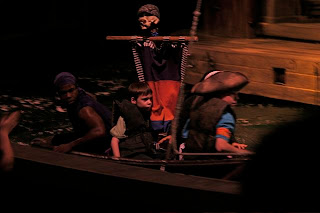 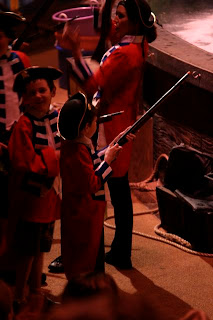 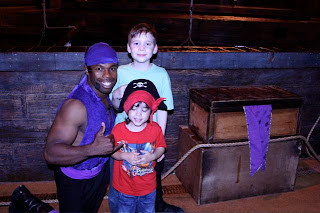 Email ThisBlogThis!Share to TwitterShare to FacebookShare to Pinterest
Labels: fun things to do, pirates, purple