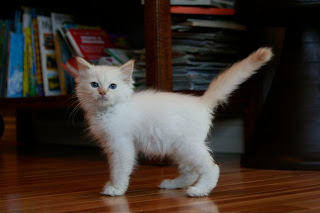 He’s a little fluffier than our other snakes. Hmmm..... Ok, ok... here’s the deal. You know the snake that Marshall agreed to let me buy after he accidentally paid a ton of money for his Ed Hardy shirt? Well... somehow it morphed into this kitty. I’m not exactly sure how, but I ended up looking at kittens online. We saw this one and then it was all over for both of us. We agreed to let this be our “snake #3”. Marshall will enjoy this one a little more than he enjoys the other snakes anyway.

We had an absolutely awesome “snake” name picked out, and well... it just didn’t quite fit this little guy. So Marshall named him “Dumbledore”. When this guy is the 20 pound gargantuan cat he will end up to be, with fluffy white hair, the name will totally make sense. He is a three month old Ragdoll. It’s the kind of cat that goes limp in your arms, lets you cradle it like a baby, will let you dress it up in doll clothes and put it in a doll stroller... you know, the perfect kitty. And, most importantly, they are low shedding. They lack the dense, insulating undercoat that normal cats have, which results in rabbit-like soft hair that sheds minimally. It’s hard to tell in the picture, but he has an orange tail, orange on top of his ears and orange stripes on the front of his face. As he gets older, his orange parts will darken. His eyes are brilliantly blue.

I think we need some sort of 12 step program, because we can’t seem to STOP. ADDING. TO. THE. FAMILY. We weren’t even home yet from the breeder’s house when Marshall asked if we could trade in our two snakes for ANOTHER kitten. First off... we’re not trading in the snakes! They’re my snakes and I love them. I love them as much as I love our kitties and more than I love the bunnies. They’re not going anywhere. And re: another kitten.... we did pick out another name for a “hypothetical” companion kitten to Dumbledore.