Finally Out of the Closet 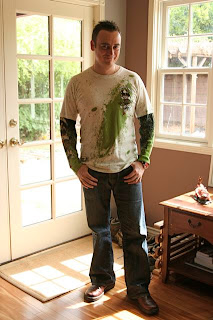 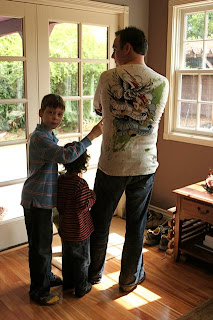 I’m talking about Marshall’s Ed Hardy shirt, of course. You know, the one he thought would cost $60, but didn’t look at the price tag and ended up paying $187. He’s kept it in the closet ever since, afraid to wear it for fear that he would look like a dork in it and feel even worse about spending so much money for it.

Well, Marshall decided to wear the shirt yesterday to church. And as you can clearly see by the pictures, he’s not even close to looking like a dork. He’s a total hottie. Try to contain yourselves, ladies. He’s taken.

Haven was pretty upset Marshall was wearing this shirt to church.

Haven: “It looks dirty, like you spilled paint over it. I don’t think you should wear that shirt to church.”

Me: “Technically, Haven, this is the most expensive shirt Daddy has... so one could assume it would then qualify as his ‘nicest shirt’. So he’s wearing his ‘nicest’ shirt to church.”

Of course that all changed once the kids discovered the metal studs that are decorating the front and back of the shirt. Especially when they learned they could turn the studs. Then it became some sort of fun activity-shirt for the kids, and Haven finally gave it his approval.
I think this is my new favorite picture of Marshall. Isn’t that a great smile/laugh? Yeah, that’s because I pointed the camera at him and said, “Work it Marshall. Make LOVE to the camera.”

I’ll have to remember to say that next time I take a picture of him.

Oh, speaking of... a few of you have asked about snake #3... you know, the snake I got Marshall to agree to, after he bought this shirt. Don’t worry, I haven’t forgotten about it. (much to Marshall’s dismay) I’m just being a little picky. It will be another corn snake, but this time a black/white snake with a zig zag pattern on it. I want a high quality one, so I have to wait and see what snakes are born this season from my favorite snake breeder, and then wait for the snake to be old enough to ship to my house. So it will be a while. I figure with a 25+ year lifespan of corn snakes, I can take my time to get the one I really want. We’ve already named him, but you all will just have to wait until he arrives before I reveal his name. I know you all are just dying to know.
at 10:58 AM