The Story of "Us" 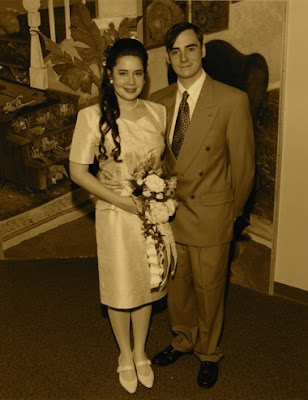 Nice photo, huh? That’s us right after we changed into our “going away” outfits at our wedding reception. It used to be in color, but the photo is so darn old, it yellowed with age. Ok, so maybe I just put the sepia effect on it. Aren’t we cute? We were just 20 and 21 years old. Awwwwww.

My friend Lori had a great idea for bloggy friends to go around and share the story of how they and their spouses met and fell in love. I figured I’d jump on the train too.

A bit of background info on me: I was born and raised in Orlando... grew up going to the same church, which changed from a small church where everyone knew everyone else, to one of those HUGE mega churches before my eyes. After high school, I went off to FSU (Go Noles!). When I returned that summer, I didn’t know hardly anyone in my church group anymore. So I didn’t participate in any of the college activities, other than just going to church on Sundays. It stayed that way until toward the end of my junior year at FSU. As summer was approaching, I had this incredible urge to get plugged in with my peers at church. It didn’t make much sense to me, but the urge wouldn’t go away, so I decided I would attend the church activities for college students that summer. When I got home for the summer, there was a “Welcome Back” party for the students returning from college, to re-integrate them with all the students who were going to school locally.

Background info on Marshall: He was born in Texas and raised in both Texas and Louisiana throughout his childhood. He went to college (UT in Austin) but in his freshman year realized that route would not get him where he wanted to go, with a profession in post-production sound for films. So he went to a special school in Orlando (Full Sail) which would get him on his way. While in Orlando, he started going to that very same church I grew up in, which was now a mega church and he got involved in the college group while I was away at school.

The Fateful Night: I remember I really didn’t want to go to this “Welcome Back” church party. My mom talked me into it, but I went grudgingly. I remember the party was at someone’s house. I arrived a bit late and most of the people were outside in the backyard hanging out and playing volleyball. I looked outside and I only knew two people. Pretty depressing for having grown up in that church. Those two people came inside the house with me to hang out and catch up on our lives. Apparently Marshall, who had been playing volleyball, saw me (after sizing me up) and decided to leave his friends and come inside to meet me. I didn’t know who he was... just some guy who decided to crash our conversation. Whatever. He jumped right in the conversation and I remember thinking he had a pretty cool sense of humor. He started flirting with me a little and I said to him in a serious tone, “I only date half Mexican-half Polynesian men.” And without skipping a beat, he replied, “What a coincidence!”. A pretty good answer, I thought. Around this time, all the outside people piled inside the house and some people ordered pizza. I wasn’t feeling too social, so I decided to leave with my two friends and go see a movie. “Dumb and Dumber” if you’re curious. And I didn’t think about saying goodbye to Marshall, because, to be honest, I didn’t even remember his name and I hadn’t even thought about him in a romantic way or in any way at that point. But as I was walking toward my car, in the front yard, I heard someone yell from the front door, “You’re leaving then?”. And it was Marshall. I pretended I was blinded by front light and couldn’t see him well, so he’d repeat his name to me (clever, huh?), which he did. I walked over to him and told him we were going to a movie. I invited him to come along, to be polite, but he had already put in money for the pizza and was going to stay. Fine, whatever, I thought to myself. All of the sudden, he reached out and took my hand, looked in my eyes, and said, “I hope to see you again soon.” Well, it was like bells ringing, birds chirping and a choir from Heaven singing all at once. I’m still not sure he didn’t put some voodoo love spell on me. I walked away a little dazed, unsure of what just happened. All I knew is that I could not stop thinking about him. And as I sat through the movie, I couldn’t help wishing I had stayed at the party.

The rest of the story: The next morning at church I happened to see him, and I swear his eyes actually lit up when he saw me. After church he asked me if he could walk me to my car. (smooth!) When we got to my car, he asked me for my number. Turns out he already got my number from someone else but then felt he should ask me before he called me up out of the blue. And in case you’re wondering, yes he did call me that very night. There was no “playing hard to get” here. For the next week, we talked on the phone every night for hours.
After a month of dating, he went home to visit his family in Louisiana over the 4th of July. During that trip, he called me and said, “I just told my parents that I’ve met the person I’m going to marry, and by the way, I need to know your ring size.” Holy Cow! We dated over the three months of summer and he gave me a promise ring before I left for my senior year in college. Shortly after, he completed his degree at Full Sail and moved to Los Angeles to begin his internship at a small independent post-production facility.

At Christmas time (after 7 months of dating) I flew out to visit him. One evening, he drove me up to the Griffith Park Observatory, where we found a secluded spot on the edge of the mountain. The view was beautiful and as the sun was setting, he got down on one knee and asked me to marry him. Don’t ask me to repeat what he said because it was all a blur. I remember the beautiful view, him on his knee and the engagement ring, and that’s about it. Oh yeah, and of course I said yes.

I visited him again for 3 days during my Spring Break. Then in July, a month before the wedding, my in-laws (that I had only met once) were throwing a “Come Meet Marshall’s Fiancee” reception in Louisiana. Marshall wasn’t even going to be there! Uh, hello everyone. Nice to meet you. Yes I’m a Yankee. And I’ve never watched Gone With the Wind. Sorry. But apparently, Marshall was able to get one day off, so he literally flew there for 24 hours to attend the reception with me.

Then with an August 31st wedding, he flew to Orlando August 29th. We married, spent our honeymoon in a Victorian Bed&Breakfast in St. Augustine, and then he whisked me off to Los Angeles where we began our glorious life together, 11 and 1/2 years ago.

And that’s our story. Aren’t you glad you asked? Feel free to play along and share your stories. Email me if you do, so I can make sure to read them.
at 11:21 PM

Email ThisBlogThis!Share to TwitterShare to FacebookShare to Pinterest
Labels: family, Marshall, me