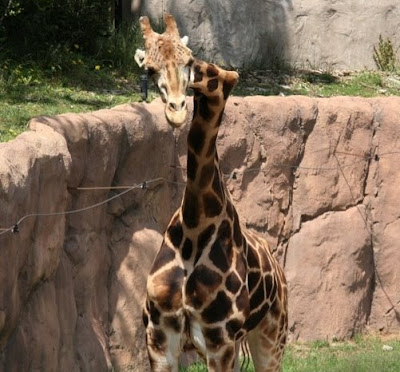 Marshall ended up having the week off, so we decided to take a mini vacation. During the planning stage, Marshall told me he wanted to keep the vacation part a secret from the kids. We agreed we’d start with a trip to the Santa Barbara Zoo, and then we’d wait until we were leaving the zoo (and normally on our way home) to tell the kids we were staying in Santa Barbara for the next couple of days.

It’s not easy packing for a family of 5 and keeping it a secret from the kids... especially our 8 year old. We’ve been trying to pull things over on him for years now, so he’s used to it and rarely gets surprised. Anything out of the ordinary, and he picks up on it and starts to suspect something’s up. You really got a keep a poker face if you’re planning something around him. A nervous smile or twitch and the gig is up.

So I pulled a few outfits from the kids’ rooms when they were in the family room the night before. I kept our luggage hidden in our bedroom. Of course there’s the usual comfort items (sheepskin & stuffed animals) our kids must always have in their beds in order to sleep. I snagged those things after they woke up the next morning and were watching cartoons. Then I had Haven go outside to feed the animals (his normal chore). When he was outside, I motioned for Marshall that the coast was clear for him to take the packed bag from our bedroom to the minivan. It was like we were pulling off some sort of heist.

With everything complete, we got in the minivan and headed for the Santa Barbara Zoo. We just love the SB Zoo. Even though we have a membership to the LA Zoo, we end up making the 1 and 1/2 hour drive to the SB Zoo as often as we can. The boys were even more interested in the reptile house this time and were eager to see as many snakes as they could. Hmmmm. I wonder why?
at 11:29 PM

Email ThisBlogThis!Share to TwitterShare to FacebookShare to Pinterest
Labels: vacation