He's Got It All Planned Out 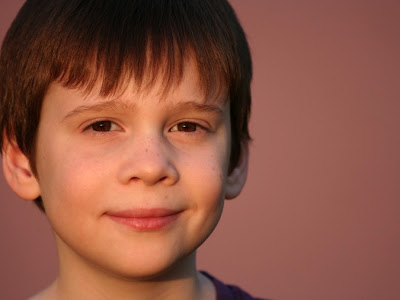 Oh I know I just showed you this picture in a recent post, but I love it so much I’m using it again. Besides, when Marshall was taking photos of Haven, he said, “Let’s take this photo for Mama” and that’s when Haven gave Marshall this look. Man I love that kid!

Yesterday Marshall had the day off, so we headed to California Pizza Kitchen for lunch. Somehow Marshall and I got on the subject of horrible teachers we had growing up. Haven then chimed in and said how happy he was that I was his teacher and he said something about how he wants his kids to be taught, which led to the conversation below....

Me: “Do you want your kids to be homeschooled too?”

Haven: “Oh yes! That’s going to be like the 5th question I ask a girl before I decide to marry her. And if she hesitates with her answer, I’m gonna know she’s just agreeing to homeschool so that I’ll marry her, and that’s no good.”

Haven: “What about that breeder lady who homeschools her kids. Does she have any girls?”

Me: “I don’t know. Possibly. And with her kids, you’d not only get a girl who might want to homeschool, you’d get a girl that grew up loving snakes.”

Haven’s eyes lit up and he said...

And just in case you’re curious about questions 1-4 that he plans to ask his potential future wife, I asked him today and this was his response...

I love that he has everything planned out at the age of 8. Other future plans include... becoming a chef and opening a restaurant with Seamus and Marlie. (though they don’t know it yet) and having four kids (2 biological and 2 adopted).