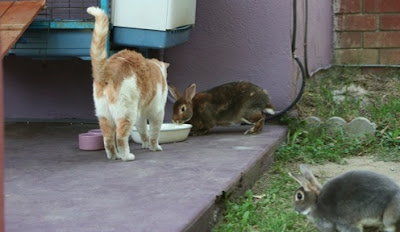 Many of you have inquired as to why I have not simply picked up the bunnies and put them down, in the yard. Well, I figured if I did that, the bunnies would never find their way back up the ramp to their cage. I want them to still have access to their cage when they need to retreat or feel safe. And, if they go down the ramp of their own free will, they are more likely to go back up when they want to.

But since patience is not one of my virtues, I finally decided to kick the bunnies out of the nest. I put a second source of food and water on the patio and let them have the run of the backyard all day long. Yemen (our outside kitty) was keen to turn their water bowl into a “community” water bowl and decided to hang with the bunnies, rather than spending his day on the roof as usual. I think he rather enjoyed the company. He’s been lonely since his best bud (and the love-of-my-life-kitty) died in 2004. And speaking of “Rigo”, Haven said, today... “Mama, when you die, I hope someone else in the family keeps this house because I don’t want anyone to dig up Rigo.” Where does he get these thoughts??? And, uh, wherever did he get the idea that Rigo is buried in the backyard? When Rigo died, I absolutely put my beloved kitty in a trash bag on the curb in front of my house while I waited for Animal Control to dispose of him, the way the city ordinances require you to do. I absolutely did not bury him in the left corner of the backyard after a family memorial service. That would be against city laws, and I’m a law abiding citizen.

So... the bunny drama is over for now. I plan to just pull the bunnies out of the cage in the mornings and put them back in the evenings, until I see them using the ramp on their own. And, yes I know they can use the ramp because they used it years ago when they were on the screened in porch. Course that was 5 years ago. Which is like 35 years ago for dogs. But since they’re bunnies, it’s more like 45 years ago. So I’m sure it will come back to them any moment now.

And since I brought up the love-of-my-life-kitty Rodrigo, AKA “Rigo”... I’ll include some nostalgic shots of my dear kitty that I had for 15 and 1/2 years...
I’ve had a lot of kitties in my lifetime (19 to be exact), but Rigo was the Best.Kitty.Ever. 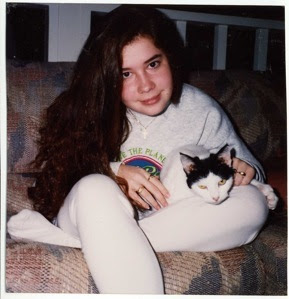 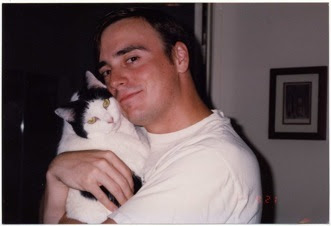 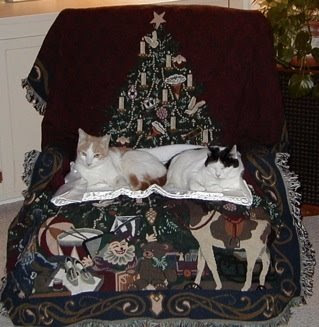 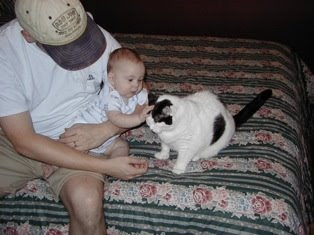