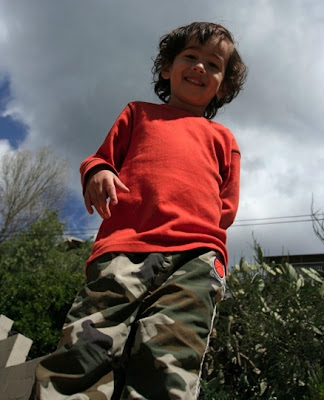 If you’ve been following my blog, you will be aware that Marlie has a hobby of exploring the various uses of poo (specifically finger painting) while quiet and pretending to sleep in her crib. After too many of these episodes, we finally resorted to putting her to bed at nap time and night time wearing footed pj’s (put on backwards) to prevent her from taking off her clothes and accessing her diaper when she is supposed to be sleeping. This technique has been very successful and we have not had a traumatic (for us) episode in quite some time. This reprieve has been lulling me into false sense of security. We are so over that phase in our lives, I told myself.

Color me surprised, to find out that my full potty trained, almost 4 year old son, decided to take a page out of Marlie’s book. Apparently at some point in the middle of the night Friday or early morning Saturday, he had diarrhea a poo consistency problem. Instead of calling for Mama or Daddy to clean him up, he decided, while safe and snug in his bed, that it would be interesting to stick his hands (yes plural) down his pants and explore the substance contained within. Fascinating. I’m not sure what all he did, but we found poo all over, including the bottoms of his feet. Nice, huh?

Marshall was getting his bath ready and telling him how gross, gross, gross his little poo party was. He then informed Seamus we had to wash all the poo off.

Seamus: “Are you gonna wash out my mouth too?”

Seamus nodded, with a very sad look on his face.

Well at least that’s a relief! So Marshall’s job was to clean Seamus up. I suppressed my very sensitive gag reflex the best I could to tackle his bedroom, which was so odiferous that the entire house now smelled like poo. Charming, especially since later that day we were having a get-together at our house with three other couples, two of which we hadn’t met yet. Nice to meet you and welcome to our house. Don’t mind the poo smell... one of our kids just decided to have a little poo party in his bed this morning. So we opened all the windows in the house, I washed everything in the room that was removable, and attacked everything else with Febreze. I then enlisted the aid of every air freshener plug in, wax tart burner, and potpourri I had, and placed them throughout the house.

I’m happy to say that we got rid of the poo smell by the time our guests arrived. Either that or they were too polite to mention it.

Never, and I mean never allow yourself to believe that you are past a certain horrible phase of parenthood. Because Mr. Murphy and his laws will be sure to smack you down.
at 11:47 PM