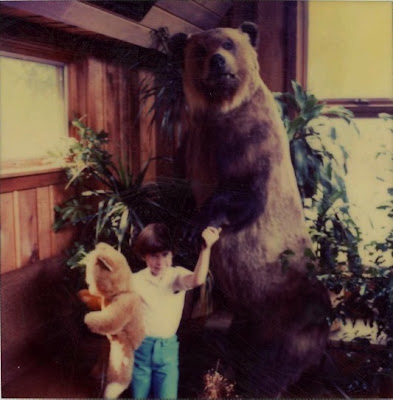 Yesterday was pizza/movie night. We watched the Disney movie Brother Bear. You know, the movie where the bears call the hunters “monsters” and you find out that the bear that the human killed in the beginning was somebody’s mother. Funny how in the movie, the bears have this tradition of telling stories to each other by throwing a 1/2 a salmon around in the circle and whoever catches the 1/2 salmon, is the next one to tell a story. What about that 1/2 salmon? I’m sure that was 1/2 of someone’s son, right? And somehow we are supposed to feel sorry for the mother bear, when no one cares they are playing toss with 1/2 a fish that was 1/2 of someone’s son? a-HA!!! Maybe they’re trying to tell us bears have feelings and fish don’t. Why the H-E-double-hockey-sticks are they trying so hard to jump upstream if they don’t have feelings? Only to be met by the jaws of death a bear, who wants to play toss with 1/2 of its body. Don’t try to play to my heart strings, people. Don’t got any.

Hey I grew up with bears. But they were real nice to me. Probably because they were dead. And stuffed. Well, four were stuffed, and one was a rug. Except in my dreams, when they came alive and chased me through the house to seek revenge, and I’m running in slow motion, and they’re catching up.....and people wonder why I’m a little “different”. Hey, aren’t we just so cute in that picture? Look, we’re holding hands. It’s like I’ve got my own personal Brother Bear. Except he’s an 8 and 1/2 foot dead Grizzly. Oh yes, Haven... Grandpa has shot lots of bears, just like those cuddly cartoon orphan bears in the movie.

Moving on... don’t you just love to watch Bindi the Jungle Girl? And is it just me or does everyone else fight the urge to burst into tears at the opening song... “The Croc Hunter taught her, now his only daughter... is Bindi the Jungle Girl.” Man... gets me every time. I loved the Croc Hunter. Sigh. So Bindi and her mom Terri are always pushing the message about saving animals, especially endangered ones. They show some of the items on their show that animals are turned into (purses, shoes, etc.). And Haven gets righteously angry when he hears people are killing endangered animals to sell the animal parts on the black market. (as he should) But the other day, I was reading to Haven out of the Bible, and all of the sudden he gets angry and says, “WAIT A MINUTE!”. He turns the Bible over and points to the cover and says, “Is THIS made from animal skin?”. To which I reply, “Uh, it’s not made from an endangered animal. It’s leather, which is made from cows, and as we all know, cows like to be made into leather and hamburgers. They understand their purpose and they welcome it. And, uh... LOOK over there, something shiny!”

Maybe this isn’t the best year to bring out my python Coach purse to use with my Easter outfit.
at 12:02 AM

Email ThisBlogThis!Share to TwitterShare to FacebookShare to Pinterest
Labels: extended family, Haven, me