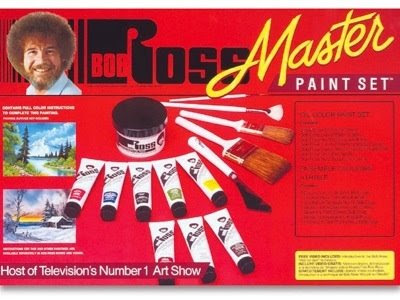 We were in Michaels Craft Store the other day, the whole family and I. And Marshall and I wanted to see if we could find Bob Ross products. Actually we had a bit of a disagreement. Marshall didn’t think Michaels would have it, and I remember Michaels being mentioned as a sponsor at the beginning of each Bob Ross Joy of Painting episode. Well lo and behold, Michaels did indeed have the Bob Ross products. Take that, Marshall! As I reminded him on the spot, and have been telling him repeatedly since we married, I’m always right. And the sooner he accepts that, the easier it will be for all of us. Moving on...

Not only did they have the Bob Ross products, but they had the Bob Ross MASTER paint set. Uh, and it was for sale for $100. Yikes. Marshall pointed out that they had a much more basic Bob Ross paint set for much less, but then I vetoed that idea. What’s the point of getting a paint set when you only have two brushes and three colors to choose from? What kind of masterpiece can you create with that? Well of course Bob Ross could have created a masterpiece with that, but I’m not Bob Ross. Yet. Anyway, $100 was just too much to spend. But just when I was about to voice my disappointment about not getting the paint set, our 8 year old son went into a bit of a tantrum, throwing us both off guard.

And he was truly upset. And then I gently reminded him, “Haven, IF we get the Bob Ross paint set, we are getting it for ME, not you, ok?” Always the encouraging mother, I am. Don’t get in the way of me and Bob Ross! So we left the store empty handed, and by empty handed, I mean with no Bob Ross products. But not before Marshall and I had the extreme urge to grab one of the Bob Ross stock knives and scrape it against one of the blank canvases for sale. We’ve both agreed the knife sound against the canvas is our favorite part of the Bob Ross painting shows. We’re a little strange, I know.

So though we didn’t get any Bob Ross products, the extreme urge to paint a Bob Ross painting has never been far from my thoughts. Might possibly be due to the fact that we watch a Bob Ross painting show every evening. But I wouldn’t settle for the basic painting set and I was not about to pay $100 for the master set. So what was I to do?

Ebay, of course. Why, you can find anything on eBay. Speaking of eBay, can’t get that darn Weird Al song out of my head. Anywho, now here I am... with the Bob Ross master paint set in my hand. Finally mine. And I paid well under $100 thankyouverymuch. Of course I have no easel, no canvas, no odorless paint thinner to clean the brushes and most importantly, no time to paint. But I’ve watched the included step-by-step instructional DVD. And I got the master kit. It’s only a matter of time now before I become a world famous artist, skilled in the art of oil painting with the Bob Ross technique. Only a matter of time.

**Update** Marshall read this post and then decided he had to give me my Valentine’s Day present early. He could not wait. I kept my eyes closed in the family room while he set everything up on the coffee table in front of me. When I opened my eyes, I could hardly believe it. Standing in front of me was a brand new painting easel, and a travel case for my brushes. Oh, inside the travel cases were even more brushes, along with odorless paint thinner and other accessories. All Bob Ross official painting gear. How awesome is my husband???

So it’s now 1:54am and I’ve just completed my first disaster masterpiece. Many more of these to come...

Email ThisBlogThis!Share to TwitterShare to FacebookShare to Pinterest
Labels: painting