Bragging About My Hubby 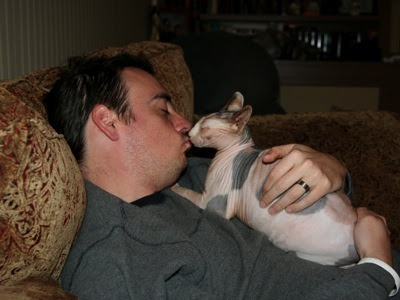 Let me just say it sucks when you AND your husband are sick with the flu at the same time. Despite being sick as a dog, hubby has managed to run out and get food for the family at meal times and even give a little love to our kitty.

While I’m here, feeling crappy as well, hubby is making a run to Michaels Craft Store because I’ve been motivated to paint and I’m lacking a certain brush that I need. And he offered to go out for me. Without me asking. Really.

Anyway, there’s not much to get excited about when you are down and out with the flu, but Marshall woke up this morning to find that his photography blog received the “blog of the day” award from fuelmyblog. Way to go, hubby of mine!

Also, many of you have seen Marshall’s One Year Later video which includes footage of us picking up Marlie from Ethiopia. The music we used was a song called “Home” by Bole 2 Harlem. That’s seriously rockin’ music that we’ve always enjoyed listening to. Anyway, Marshall was recently contacted by Duke Mushroom, who is the producer and one of the artists in Bole 2 Harlem. Someone forwarded our You Tube video to him. Not only is he not upset about us using his music without permission (WHEW!), he asked Marshall if he can put our video on his personal MySpace page. How cool is that? What an honor!

I’ve said it before and I’ll say it again. My hubby rocks.