That's What Brothers Are For 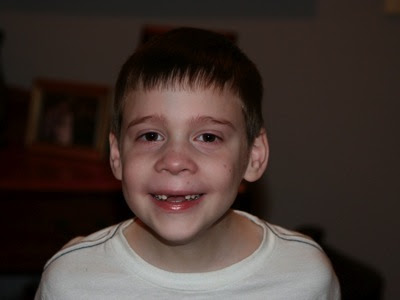 Haven’s top front teeth have been loose for a while now, but they weren’t quite ready to come out. That is until yesterday evening when his front teeth ran into Seamus’ head.

After applying some pressure to the gums with some paper towels (to stop the significant bleeding), I was able to make an assessment of the situation. Holy cow... those teeth looked horrible. And they were too loose to leave in his head. I was convinced he’d choke on them in his sleep if I let him go to bed with them.

So I had him ice his gums for a while and then I tried to wiggle them free. Haven wasn’t especially appreciative of this and I was slightly freaked out by it myself, so I did what any normal person would do... I left the teeth-pulling task for Marshall to do when he got home from work. He happened to get home a bit late, so I put the younger kids to bed and let Haven stay up for the super special daddy-pulling-teeth-bonding-time. Lucky him.

I cuddled Haven and held him down held his hand while Marshall did the teeth pulling. Marshall was very gentle and did the wiggling/teeth pulling gradually, eventually taking over 30 minutes (taking occasional breaks) before the teeth were finally out. When the teeth finally came out, they came out connected. Icky!

I’d be lying if I said it was a joyous occasion or that Haven was thrilled to have his teeth pulled out by Daddy. So to ease the stress of what just happened, the three of us cuddled on the couch for about 30 minutes afterwards. Of course we kept telling Haven to say “Suffering Succotash” and “She sells seashells by the sea shore.” and other “s” words that made us all giggle when he said them. Boy that just does not get old. No really, we were laughing with him. I know, we’re terrible parents, making fun of our dentally-challenged kid.
at 6:20 PM