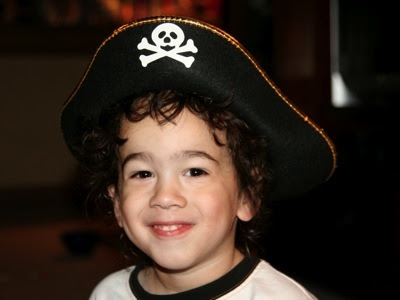 Ladies and Gentleman... we have success! The pirate ship has been sunken. And might I add by an adult sized cannon ball! Must have been saving up!

The two pieces of chocolate and a circus peanut has been distributed to the very successful pirate. I also gave him the Jack Sparrow spinning compass I promised him. Captain Shea Beard then called Pirate Daddy to tell him the good news.

Now we’re off to the toy store where he can pick out one toy of his choice...

And I didn’t end up having to offer him the keys of the car after all!

I’m one proud pirate mama! All it took was a little motivation a lot of bribery.